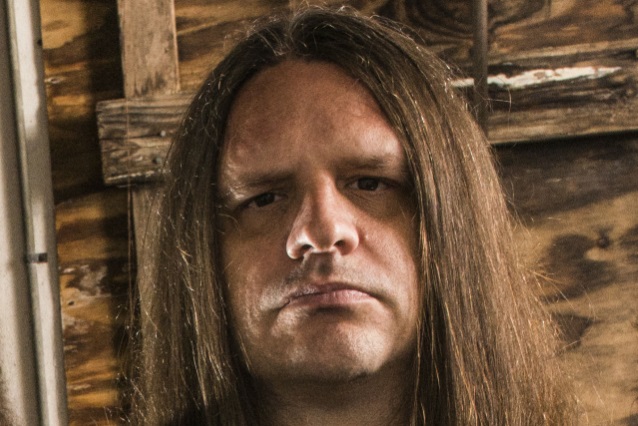 CANNIBAL CORPSE frontman George "Corpsegrinder" Fisher says that everyone should wait for all the facts to emerge before rushing to judgment in the case of DECAPITATED, whose members have been accused of kidnapping and raping a woman on their tour bus nearly three months ago.

The woman alleged she was gang-raped by all four members of DECAPITATED in their tour bus bathroom after the band's August 31 concert at The Pin concert venue in downtown Spokane. The woman said entered the bus for drinks with the band before each member forced themselves on her.

The musicians were arrested on September 9 in Santa Ana, California after performing at the Observatory. They were held in Los Angeles County Jail before being extradited to Spokane, where they were charged with rape and kidnapping.

Fisher, who never toured with DECAPITATED and only "hung out" with the members of the Polish group once more than a decade ago, spoke about DECAPITATED's legal predicament during a recent interview with "The Jasta Show".

"Bottom line, to me, you just have to wait and see," Fisher said (hear audio below). "I can't comment. I don't know them that well.

"Rape is a serious allegation and it's a serious crime and it's a heinous crime. And I know it's kind of weird coming from me, [considering] the songtitles we have, but… I have two daughters, and you'd better run for your life if you do something to my daughters," he continued.

"But with that said, I don't know what's real. But you have to take the girls' words for it too. If that really happened, then, yeah, throw the book at [the DECAPITATED guys]. And if it didn't, then throw the book at the people who falsely accused them. That's the way I look at it. And just wait and see what happens before everyone starts judging."

Fisher added that he was aware most people would expect him to automatically take DECAPITATED's side "'cause they're a death metal band and they're my friends." But, he explained, "I don't know them that well, and if it was another band, I still would want to get the facts; you have to know what happened. Who knows what's going on?

"I don't wanna say too much to make it seem like I'm taking the band's side, when there's two sides to it," he continued. "People lie, and someone's lying here. I don't know who it is."

Fisher went on to say that the DECAPITATED case is "one of the craziest things that I've heard in a long time happening on the road. And we've all been on the road, countless tours. There are bands, there are girls, there are parties that don't even involve sex or anything, where [someone goes], 'Hey, he fell over and broke his arm, 'cause he's dumbass drunk.' Shit like that happens. This is way worse, obviously. And there is no way to justify if it really happened. And if it didn't, then something's gotta be done to people who falsely accused [the guys in DECAPITATED], because that puts women that have actually been raped that don't wanna come out… If you have people lying about it, where does it put people who wanna come forward?"

DECAPITATED announced in September that it was canceling all previously announced tour dates. The band also publicly denied the accusations.

In a statement released last month, the DECAPITATED members said that the charges against them were pressed "as a procedural formality," adding that "without doing so, [the police] would be forced to release band. This is not a conviction or any indication of guilt or innocence."

The musicians went on to say: "Some facts are indisputable at this point — that the original officer who took the complaint from the accuser stated, 'I do not have probable cause that a rape occurred,' and it's taken a full thirty days to file charges, which is right up against the point at which the defendants would legally have had to be released.

"The band firmly refutes the allegations and are confident that once the facts and evidence have been seen and heard, they will be released and able to return home."