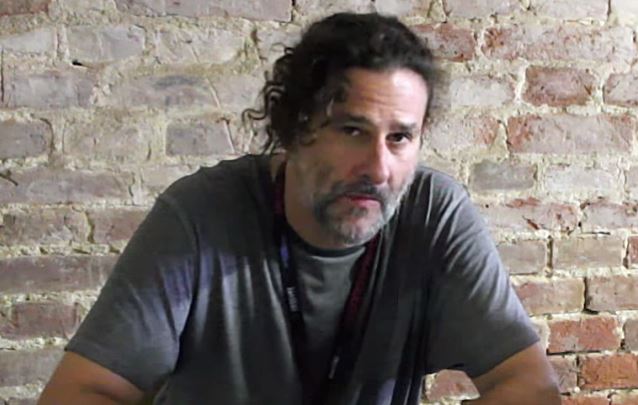 CANNIBAL CORPSE drummer Paul Mazurkiewicz says that the seemingly disastrous attendance figures for this year's edition of the Rockstar Energy Drink Mayhem Festival could have been avoided had Mayhem organizers managed to secure a bigger band than SLAYER to headline the traveling festival.

The 2015 Mayhem Festival generated controversy earlier in the summer after festival co-founder Kevin Lyman blamed the event's low ticket sales on the fact that metal has failed to produce new and younger headlining bands, adding that "metal got gray, bald and fat" and "chased girls away." SLAYER guitarist Kerry King responded by saying that the problem with this summer's event lay not so much with the metal bands themselves but with the way the festival was organized. He told Metal Insider: "Do I know this tour wasn't booked correctly? Absolutely I know this tour wasn't booked correctly. [Fellow SLAYER guitarist] Gary Holt made the comment that usually there's the main stage, a second stage, a third stage, and then that piece-of-shit record stage… Now what they're calling a second stage is at best a fourth stage and they're wondering why people aren't showing up." He continued: "It's easy to fill these stages, but I guess they wanted a different price point, take away the second and third stage which I think had a lot of value. To me, a second-stage headliner is ANTHRAX, MACHINE HEAD…"

Asked in a brand new interview with Metalshop TV why he thinks European heavy metal festival have managed to thrive and continue to be successful while U.S. festivals are seemingly struggling to stay afloat, Mazurkiewicz said (see video below): "It's really a different thing. Obviously, over here in Europe, you have these weekend festivals, and there's a lot of them. You don't really have that that much in the United States. You have the Maryland Deathfest, which is kind of the European way — a weekend thing, I guess. But, yeah, most of the U.S. tours that happen, say, during the summer are the things like the [Vans] Warped Tour or Mayhem, where they're traveling festivals that play every day in a different city."

He continued: "It's hard to really say. But, I mean, you've seen everything [and], I'm sure, read everything online [about this year's Mayhem festival]. We're doing the same thing — reading what we see. And, I mean, it just looks like this year, it wasn't strong enough to be… you know, to the masses. I mean, in the United States, metal is very big, of course, but, I think, having a band like SLAYER headline Mayhem, it seemed like it may be not the greatest idea. For us, it's great — SLAYER are our idols and our kings, so for them to headline Mayhem, to me, is, like, 'Wow! That's amazing. That's great.' But in the realistic whole scheme of popularity, maybe, and record sales and all that, it was a downsize, in a way."

Paul added: "When we played [mayhem] two years ago, we were with… AVENGED SEVENFOLD [were] headlining, and AVENGED SEVENFOLD are a huge band in America right now. So just for that reason alone, there should be more people coming to the show, wanting to see AVENGED SEVENFOLD. There was KORN as well, and you had a great whole secondary stage and all this kind of a thing. You know, it was downsized this year — you saw the lineup and everything — but, yeah, I think that was the big downfall. If they had a bigger band to headline, then maybe it would have been more successful."

This year's Rockstar Energy Drink Mayhem Festival kicked off on June 26 in Chula Vista, California and wrapped on August 2 in Dallas, Texas.