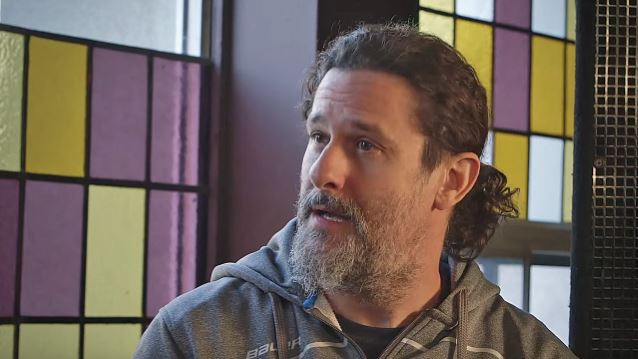 Paul Mazurkiewicz, who plays drums for Florida-based death metallers CANNIBAL CORPSE, and is a founding member of the band, tells the Phoenix New Times that he isn't concerned about how his ten-year-old daughter will perceive the gore-filled lyrics that he writes for the group.

"I think she is still too young for her to comprehend what is going on," he says. "She knows what I do, but you can't talk to your kid in every [stage] of their life about everything that is going on with your life. … When I'm home, it's completely the opposite of what I do. I'm not home blaring music ... It's all separate. I believe there will come a time when she's older where she might want to understand. My daughter is fully aware of what I do, but she's not interested in it. In fact, she doesn't like it and that's okay. I want her to be her own person. She may get into it or she may not, and that's fine."

Mazurkiewicz made similar remarks about his daughter in a 2015 interview with Banger TV. He stated at the time (see video below): "She's seen some videos, she's seen me actually drumming, but it's funny, 'cause she does not care at all. And maybe it's just that age. Maybe she'll never care. I really don't mind if that's the case. It is weird. I mean, I live such a different life, I guess, when I'm home and all that. I mean, she knows I'm gone, she knows I play in a band, but I don't think she realizes the magnitude of all this. But, yeah, it'll be interesting to see what she thinks maybe in a couple of more years, when she's able to understand it a little more and absorb. Is she gonna completely shun it, or, you know, who knows? Maybe she'll become a fan."

Asked how he personally stays inspired to continue to write dark, violent music after all these years, Mazurkiewicz told Metal Insider in 2014: "It's very strange these days. We've been doing it a long time, of course, all of us writing lyrics and everything. I just delve into my own imagination at this point, the way I do it. It's not like I'm thinking of these things on a daily basis, not like I'll be walking back to the bus and go. 'Oh, hey, I've got a great song idea for the next record!' I'm not thinking of these things whatsoever. When the time comes to think of those things, we sit down and it just comes out for me. I just really delve into my own imagination. I guess we have been absorbing things for years, real-life stories, books, all that stuff is embedded in us. So for me in particular, I don't need to go, 'Oh, okay, we're gonna start writing lyrics. Let me start gathering sources of inspiration.' To me they're already in there, I just gotta pull it out, and I'm pulling it out when it comes down to 'Oh all right. We need songtitles!' That's where the brainstorming starts, and once we have songtitles… I never work usually the other way. I always have my songtitle working, which then gives me my idea of where I want to go with that song."