Bassist Alex Webster of Florida-based death metal veterans CANNIBAL CORPSE recently spoke to Roadie Crew magazine's Thiago Sarkis about Webster's favorite albums of 2008. Alex's choices for the best albums of the year, along with his comments, follow below.

Alex Webster: "This album really shows how a band can have extremely unusual music and still write a memorable song. They have incredible technique, but it clearly is only being used to make great songs (not to show off the technique itself)."

Alex Webster: "This album is one of my favorite instrumental guitar albums ever because it features top-notch guitar playing in a much heavier setting than you'd normally hear it. I love instrumental music, and I love heavy music, and this album is both of those things."

* HOUR OF PENANCE's "The Vile Conception":

Alex Webster: "Ultra-brutal, high-speed death metal that reminds a bit of a mix between MORBID ANGEL and KRISIUN, which if you know my musical tastes is about the highest compliment I can give. A killer album I would recommend for all death metal fans."

Alex Webster: "This album features some of the tightest guitar/bass/drum work ever. The band is absolutely locked in and playing like a crushing extreme metal machine."

Alex Webster: "This is a very heavy but psychedelic album. There are a lot of really interesting musical ideas on this album, but it is still heavy enough to be played alongside any death metal album."

The complete article (in Portuguese) is available at Solada. 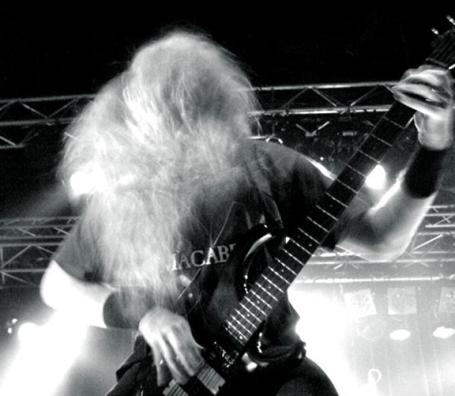