CANNIBAL CORPSE will wrap up its 25th-anniversary celebrations for 2013 with a pair of shows in Florida, which has served as the band's base of operations since relocating to Tampa from Buffalo, New York in 1994. The concerts are scheduled for November 29 in Ft. Lauderdale at the Culture Room and November 30 in Tampa at the Brass Mug. Tickets will go on sale this Friday at Ticketmaster.com for the Culture Room.

Comments CANNIBAL CORPSE founding member and bassist Alex Webster: "We are very excited to be doing these shows in Florida this November.

"We formed the band in the first week of December back in 1988 so these shows will be happening almost exactly 25 years after our formation. It will be great to celebrate our band's anniversary in the state that helped put death metal on the map. Also, we are very happy to be able play Ft. Lauderdale to make up for the show we missed there in June. And I think fans in both cities will be happy when they see the ticket price for these shows!"

Metal Blade Records has been releasing one picture disc a month from the band's expansive catalog of releases ("Eaten Back To Life", "Butchered At Birth", "Tomb Of The Mutilated", "The Bleeding", "Vile", "Gallery Of Suicide", "Bloodthirst", "Gore Obsessed", "The Wretched Spawn", "Kill", "Evisceration Plague", "Torture"). A total of 12 pictures discs will be released, covering all of the band's full-length studio albums, some of which have never been released on picture disc.

Earlier this year, it was announced that CANNIBAL CORPSE was selected for induction in the Buffalo Music Hall Of Fame as a member of the Class of 2013. CANNIBAL CORPSE is the latest addition to the Hall Of Fame, which also includes Buffalo natives the GOO GOO DOLLS, Billy Sheehan, 10,000 MANIACS, and many more. The Class Of 2013 will be inducted into the Buffalo Music Hall Of Fame at its 30th-anniversary induction gala, which will be held October 3 at the Tralf Music Hall in Buffalo. 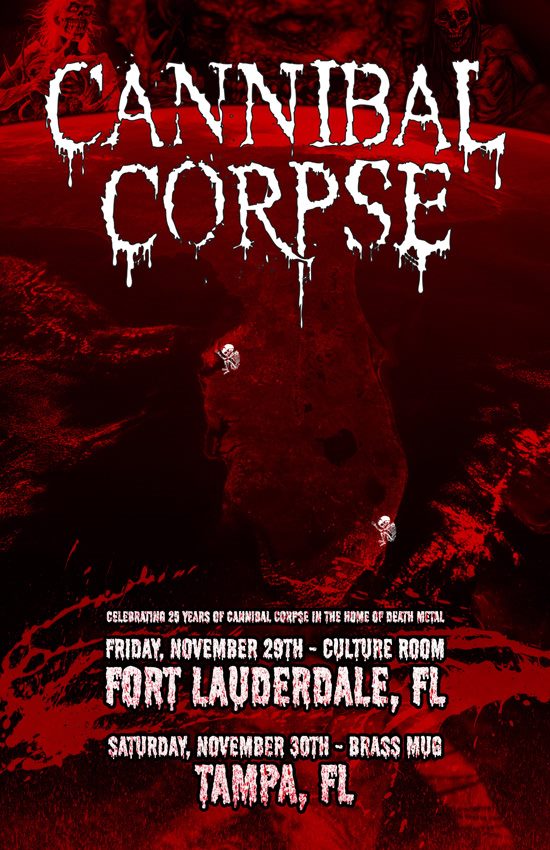