CANNIBAL CORPSE and MORBID ANGEL will join forces for the first time ever in America to co-headline the 2019 Decibel Magazine Tour. Rising Bay Area brutalizers NECROT and space-obsessed Denver death dealers BLOOD INCANTATION round out the bill. New York death metal icons IMMOLATION will join the final week of the tour as main support to MORBID ANGEL, as CANNIBAL CORPSE exits the tour after the New York City date.

"We're really looking forward to our second appearance on the Decibel Tour; they always put together a killer line up and this time is no exception," says CANNIBAL CORPSE bassist Alex Webster. "We're particularly excited to be hitting the road with our friends MORBID ANGEL. In fact, this will be the first time we've toured together in the USA."

"Everyone here in the MORBID ANGEL camp are stoked to do this tour with CANNIBAL CORPSE," says MORBID ANGEL's bassist/vocalist Steve Tucker. "To celebrate, MORBID ANGEL will be performing a mean-ass set of songs that will cover the entirety of our years of kicking ass." "We will be adding some of the older songs back to our set," assures MORBID ANGEL founder Trey Azagthoth. "See you all there."

Tickets for the 2019 Decibel Magazine Tour go on sale Friday, November 16 at 10 a.m. local time and can be found at this location.

MORBID ANGEL's most recent disc, "Kingdoms Disdained", came out in December 2017 via Silver Lining Music in the U.S. and JVC in Japan. The disc, which reunites Azagthoth with Tucker, was recorded at Mana Studios in St. Petersburg, Florida and produced by MORBID ANGEL with Erik Rutan (CANNIBAL CORPSE, HATE ETERNAL, SIX FEET UNDER, BELPHEGOR).

Joining Azagthoth and Tucker during the recording sessions for "Kingdoms Disdained" was drummer Scotty Fuller (ANNIHILATED; formerly of ABYSMAL DAWN). 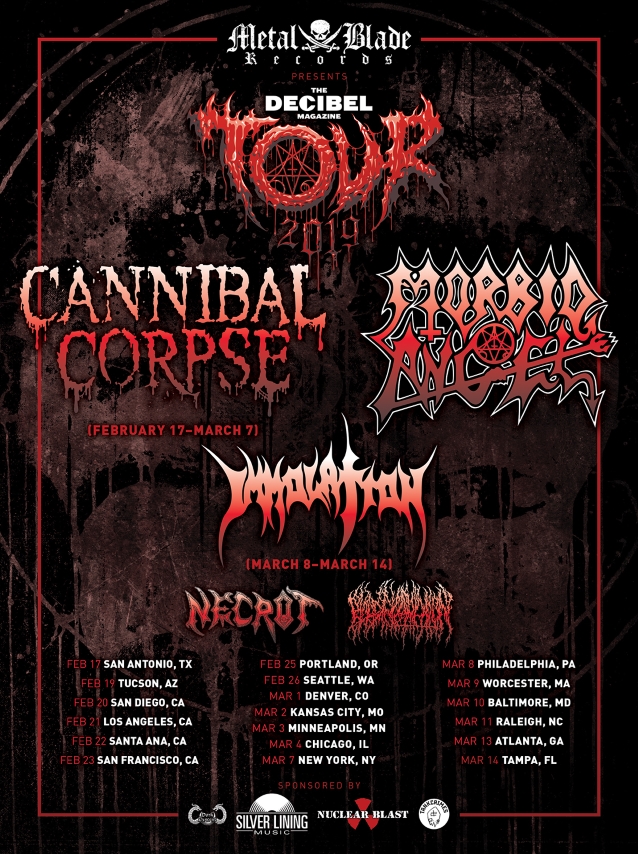