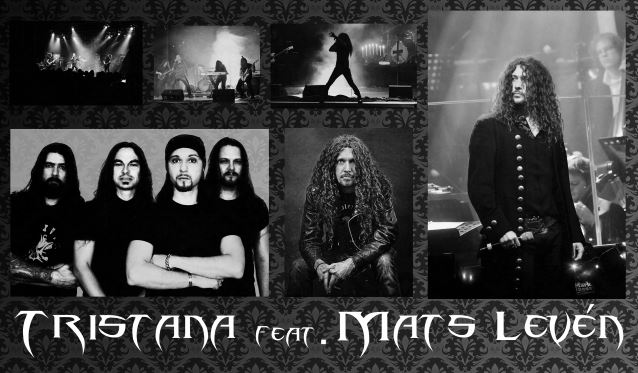 Levén began his career in 1986 in the bands SWEDISH EROTICA and TREAT. In 1997 came his first worldwide success as Mats teamed up with guitarist Yngwie Malmsteen, recording the album "Facing The Animal" and doing a promotional tour. In 2002, he joined the doom metal project KRUX and German power metallers AT VANCE. Around the end of 2003, symphonic metal band THERION asked Levén to join them for the recording of their albums "Lemuria" and "Sirius B". In 2007, THERION released "Gothic Kabbalah" and recorded backing vocals for APOCALYPTICA's album "Worlds Collide". Currently, Mats is the lead singer of CANDLEMASS and collaborates with OZZY OSBOURNE guitarist Gus G. Mats sang most of the songs on Gus's "I Am The Fire" album and has toured with Gus in Europe.

TRISTANA's third album, "Virtual Crime", is described in a press release as a mixture of "modern alternative metal," "atmospheric hard 'n' heavy' passages" and "groovy death metal growls and electronic keyboards. Their debut CD, "Back To The Future", was released in 2003.

Said TRISTANA vocalist Peter Wilsen: "Mats is a great singer. I saw him first time on Malmsteen's live DVD 'Double Live!' from 1998. I was a teenager and I started to sing in the first band. I cant believed how powerful he sang high tones and how easy managed it. His voice is very characteristic and this is very important for good singers."

TRISTANA FEAT. MATS LEVÉN will play songs from "Virtual Crime". Mats will take over clean singing parts and Peter Wilsen will do the growls.

Later this year, TRISTANA will record a new song and music video with Mats.