Swedish doom metal legends CANDLEMASS to perform their "Ancients Dreams" album in its entirety at Mikael Åkerfeldt's (OPETH) 2014 curated Roadburn event on Friday, April 11 at the 013 venue in Tilburg, The Netherlands.

"Wow, just wow!" says Åkerfeldt. "I am friends with the entire band, and especially boss/bassplayer Leif Edling. He is just a text message away and we meet up frequently to talk music and eat spicy food. Under the influence of… beer. And fine Italian wine.

"When OPETH started, myself and founder David Isberg agreed that our sounds should be a mix of MERCYFUL FATE, BATHORY, MEFISTO and CANDLEMASS.

"It's such an amazing honour for me to share stage with one of my primal influences since the dawn of OPETH.

"Leif has always had a chip on his shoulder when it comes to their timeless masterpiece, 'Ancient Dreams'. I don't know what it is, since I've always held that record in such high regard. At Roadburn we'll get a rare chance to witness it performed in its entirety. Maybe Leif has changed his mind, I don't know, but I won't fucking complain, though, that's for sure."

"It will be a total joy to perform 'Ancient Dreams' at Roadburn," says Leif Edling, "It's a classic record that has been a bit overlooked through the years, and quite truthfully, I haven't been in total love with it since the production doesn't reach 'Nightfall' standards. But nevertheless, the music is good. Songs like 'Mirror Mirror', 'Darkness in Paradise', 'Bearer of Pain' and the title track are really cool pieces that we'll love to play once again. Slow, heavy and majestic... they're my own key words to describe this album, and to play 'Incarnation Of Evil' and 'The Epistle' live for the first time will be interesting... hehe!

"I could never imagine that I would still be playing this weird doom metal that we started over 25 years ago, and to have a special performance doing 'Ancient Dreams' is totally surreal if you ask me... but FUN AS HELL!!

"Maybe I can persuade Mikael Å to grab the microphone and join us on stage… I'll work on it."

"Roadburn 2014 will be the first time ever I do gigs with two different bands in the same weekend," says Edling, "But playing with AVATARIUM at the Roadburn Afterburner show will be exciting as it will be one of our first gigs outside Sweden, and a rendezvous with the international press and fans. I hope we can pull it off!

"It feels like I'm 20 and about to make my live debut again.

"What's cool is that many of the songs from the first album are written for a live situation, specially arranged to grow and become something more than the recorded versions, and now we have the opportunity to play them as we thought they could be played... or fail completely doing it, hehe. Well, guess we'll find out at Roadburn!

"Anyway, I'm thrilled, stoked and honoured about the whole thing. 'Moonhorse', 'Boneflower' and 'Lady In The Lamp' are songs that have the potential to capture an audience and it will be a thrill to present Jennie-Ann's voice to the Roadburn crowd as well!"

Adds Åkerfeldt: "At another metal talk/wine session, Leif once suggested we should write music together. I said 'of course,' not really aware that I had little time for anything apart from my current business. Leif is a workaholic and all of a sudden he texted me saying, 'I've got two songs ready! Come on!' I got somewhat stressed out and gradually it was understood between the both of us that I would not be able to find the time to participate. However, Leif soldiered on, found an amazing lineup, fronted by the charismatic genius vocalist-ess Jennie-Ann Smith and has now released a 12-inch single as well as their debut album. Hearing some of the early demos made me go, 'What the fuck?!' wishing I'd shuffled my priorities around. It was/is so good. So fucking good! Is it doomy? Goddamn right it is! AVATARIUM got a sound that is both traditional metal and something 'new' that I can't put my finger on what it is. I think it might be the elusive 'magic!' They've got it." 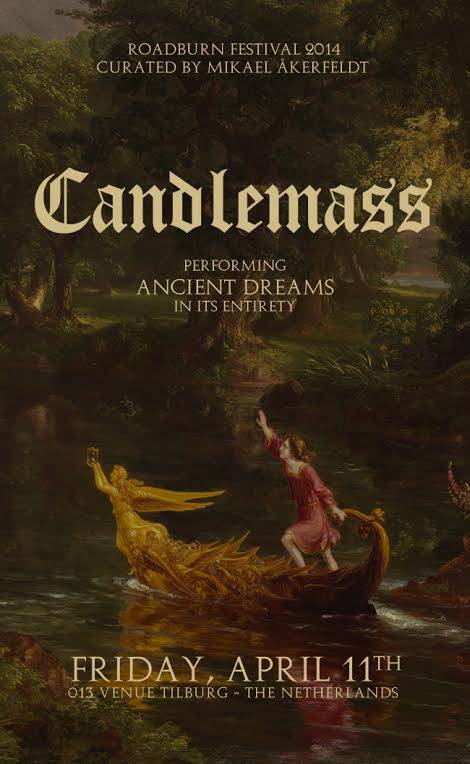