VOLBEAT was forced to cancel its Sunday night (May 3) show in Calgary, Canada, after a building engineer determined the Calgary Stampede Corral's infrastructure was not strong enough to support the bands' production requirements. VOLBEAT wrote at its Facebook page, "In order to ensure the safety of the fans and band, it was decided by the building not to proceed with the show in this building at this time. VOLBEAT are disappointed that the show can not go on as scheduled and expect to return at a future date."

However, according to Kurt Kadatz, director of community engagement and communication for the Stampede, the venue "did not make the decision to cancel the concert.'

He told the Calgary Herald: "We were ready to host a safe a successful concert [Sunday] night with an equipment load that was safe and approved, and the decision was made outside of the Stampede not to go ahead with the concert."

Kadatz added: "The rigging submission was approved by the venue and the structural engineer and the equipment was installed and inspected on Sunday and approved to proceed with the event. So we were surprised when, about 90 minutes before the concert, the promoter let us know that a decision had been made not to go ahead."

Refunds for tickets already purchased were starting to be issued on Monday morning (May 4).

VOLBEAT is currently on tour with ANTHRAX and CROBOT and is next scheduled to play in Regina, Saskatchewan on Wednesday (May 6). The trek wraps up on June 2 in New York City.

The Danish-American act is still touring behind 2013's "Outlaw Gentlemen & Shady Ladies", which has sold almost 300,000 copies in the U.S.

The album featured the No. 1 singles "The Hangman's Body Count" and "Lola Montez", as well as the Top 10 tracks "Dead But Rising" and "Doc Holliday". 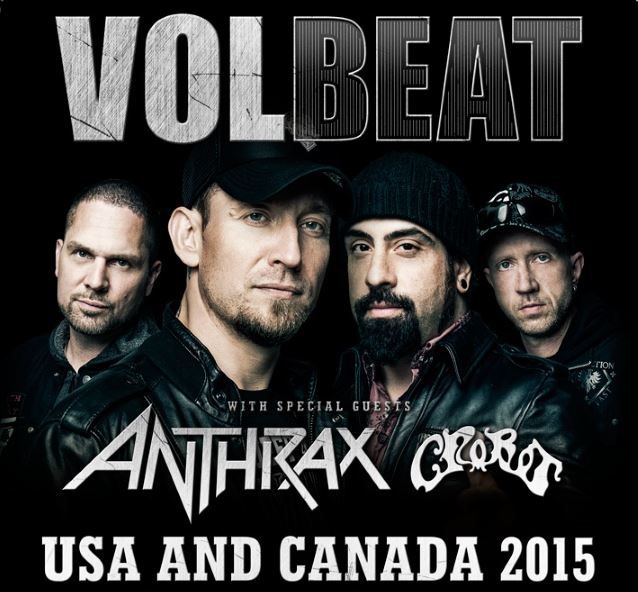