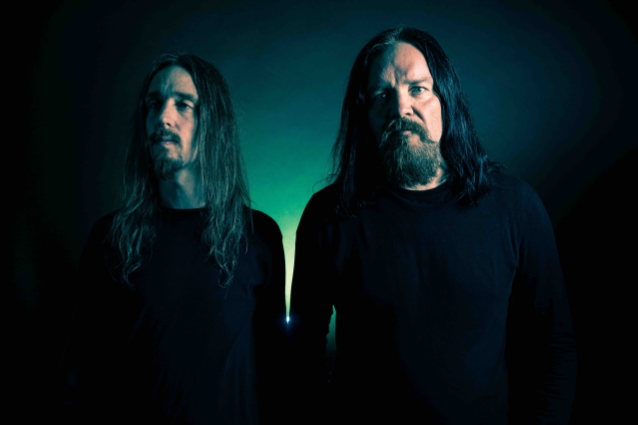 CADAVER, one of the first Norwegian death metal bands to release an LP, is back.

Exploding back into action for the first time since 2004, founder member and CADAVER mastermind Anders Odden (SATYRICON, ORDER) has returned to reclaim his throne as one of Europe's true death metal pioneers. To open up the new chapter of CADAVER, a brand new track, "Circle Of Morbidity", is now available in video form via YouTube. This first track also features guest vocals from Jeff Becerra (POSSESSED).

Emerging from the fertile maelstrom of the late '80s metal underground, CADAVER was among the first Norwegian extreme metal bands to gain any recognition away from their homeland. With a sound that mixed the raging brutality of POSSESSED and DEATH to a distinctly Norwegian sense of discord and disquiet, Odden and his teenage band mates secured a deal with Earache Records sub-label Necrosis and released its debut album, "Hallucinating Anxiety", in 1990 (initially as a split with Swedish kindred spirits CARNAGE). A more progressive and adventurous but no less vicious follow-up, "...In Pains", arrived in 1992: but for all their momentum and unique, malevolent charm, the first CADAVER lineup was ultimately doomed to disintegrate barely a year later. Nonetheless, their status as cult heroes was beyond dispute.

Odden, meanwhile, has been steadily accumulating material for a new CADAVER release for the last decade. The final piece of the puzzle fell into place when Anders forged a new friendship and artistic partnership with MEGADETH (and former SOILWORK) drummer Dirk Verbeuren.

"In my heart I have always had the notion that CADAVER exists somehow," Anders explains. "Dirk played session live work for SATYRICON on the 70000 Tons Of Metal cruise in 2014 and we got to know each other then. He talked about how much he loved CADAVER and I then told him that I had been recording demos for 10 years without a drummer... so, being the guy he is, he then says, 'Send the songs to me!'"

The result of that impromptu collaboration is "Edder & Bile" — the first album from this brand new incarnation of Odden's original, extreme metal vision. CADAVER is currently talking to a number of record labels about the release of "Edder & Bile" later this year.

Regarding working with Jeff Becerra on "Circle Of Morbidity", Odden says: "When I heard POSSESSED for the first time in 1985, I knew this was my kind of music. To have the original creator of death metal on our comeback single is huge for me, I am beyond thrilled to show everybody what we have been cooking up this time around." Becerra says: "It was a great honor being asked by Anders to sing backup vocals on 'Circle Of Morbidity'. Of course, working with Anders Odden and Dirk Verbeuren is like a fantastic nightmare, brutal and heavy as hell. Congratulations to Anders Odden/CADAVER on this brand new single. Amazing song, thank you!"