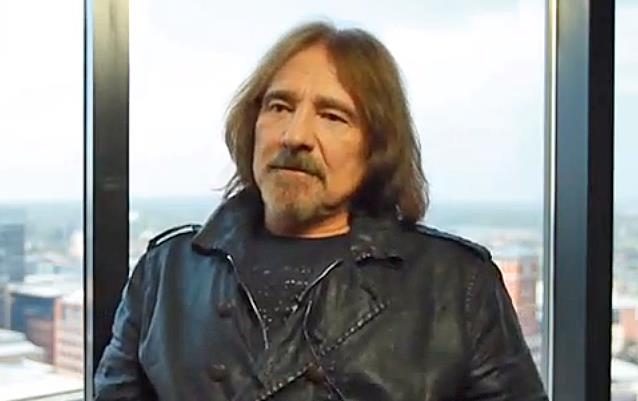 Brian McCollum of the Detroit Free Press recently conducted an interview with legendary BLACK SABBATH bassist Geezer Butler. A few excerpts from the chat follow below.

On the band's new album, "13", topping sales charts across the globe:

Butler: "It's just amazed us. We thought there'd be some interest in it. But never in our wildest dreams would we have expected it to go to No. 1. Around the world, all over the place, it's doing well."

On the original BLACK SABBATH lineup being considered the band's most definitive incarnation:

Butler: "When you mention it to the average person, they'll know BLACK SABBATH with Ozzy [Osbourne, vocals] in the band. That was our breakthrough (period) in the '70s. People so often associate Ozzy with SABBATH, and SABBATH with Ozzy. It's the same thing with a band like VAN HALEN — people like David Lee Roth and Sammy Hagar, but the classic lineup would be Dave."

On producer Rick Rubin's contribution to the new album's success:

Butler: "When we tried to do albums in the past, we all had different ideas of what it should be like, and it never ended up being successful. This is what we needed — we needed a producer. Rick Rubin had always made it known he wanted to be the first-choice producer if we all got back together.

"He wanted to go back to the old, basic sort of SABBATH sound — not a lot of overdubs, just a couple of guitar solos. You capture the feeling. With a lot of bands these days — and we have in the past — you'll go put the drums down, the next day you put on the bass, then guitar. It doesn't have the same feeling as being in the room together with Ozzy singing. That's how we did the first three albums."

Butler: "Tommy's a real nice bloke to get on with as well. He's a phenomenal drummer — he picks things up so quickly. It's incredible the way he works. He's really dedicated to the stuff he does."

Butler: "It would be great if Bill ever came back, it really would, if all the stars and planets were aligned. It would be a democratic decision, really. If Bill felt up to it, and played like he used to be able to play, we'd have welcomed him with open arms. But you have to maintain a certain standard. You can't go on with someone not up to standard, no matter who they are."