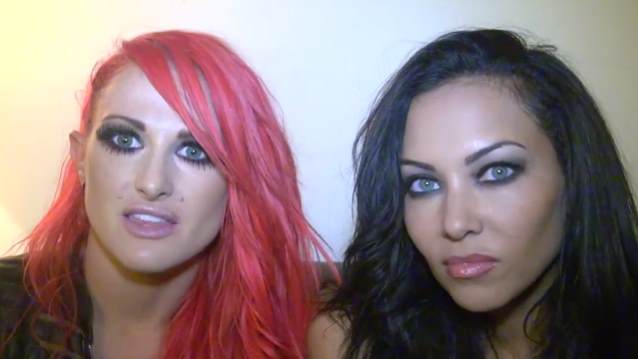 RockScene.com conducted an interview with BUTCHER BABIES frontwomen Carla Harvey and Heidi Shepherd on May 7 in Philadelphia, Pennsylvania. You can now watch the chat below.

In a 2013 interview with Metal Exiles, Heidi stated about BUTCHER BABIES being labeled a "shock rock" band: "People say that we are, but sometimes I do not see us that way. I think people are just shocked at a couple of girls acting the way that we do. I think that’s what's mostly shocking. Besides Wendy O. Williams, I haven't seen a female do anything shocking in music in a long time. This is really who we are, but with the blood, the theatrics and the horror; those are things that we love, it's what we are about. It's part of our character, it is who we are when we jump on stage, so it's not for shock, it's just how we feel."

Regarding the lyrical inspiration for "Goliath", Heidi said: "'Goliath' is something that we have held inside us for a long time. I have a green binder that I have all of my writing in, and I have had it since I was 12, so anything I have ever experienced in my life is in there and that's where we pulled a lot of the material from. A lot of things on this record are things that most people go through and we just turned a negative into a positive."

In an interview with CrypticRock.com, Shepherd stated about the musical direction of "Goliath": "The album, as a whole, is very diverse. There is basically something for everybody. We all have different influences and everything is portrayed on this album. Jason [Klein, bass] loves death metal; Henry [Flury, guitar], in general, metal; I love nu-metal; and Carla loves classic metal. We all love every [kind of] metal but those are our favorite and those are where we came from. All our influences shine bright on this album. It's definitely a coloration of everybody's influences and everybody's love. We're all very proud of it in one way or another. There is something for everybody in it."