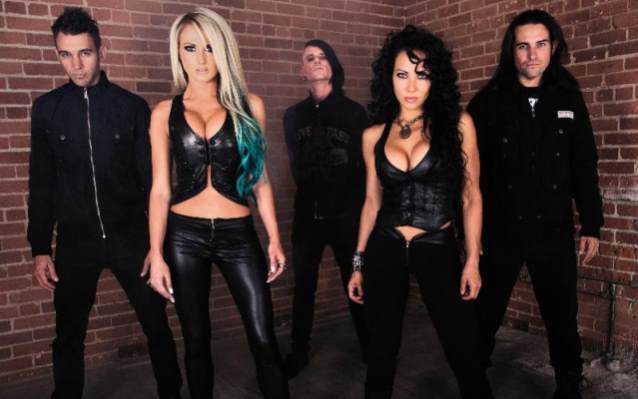 Australia's Music Feeds recently conducted an interview with BUTCHER BABIES. You can now listen to the chat in the YouTube clip below.

BUTCHER BABIES has spent much of the summer writing and recording some of the material for its forthcoming second album with producer Logan Mader (FIVE FINGER DEATH PUNCH, DEVILDRIVER, CAVALERA CONSPIRACY). A 2015 release via Century Media is expected.

BUTCHER BABIES' Heidi Shepherd told Music Feeds: "We have something coming out in October. I can't say exactly what it is. But I'm gonna hint to it, 'cause I want to hint to it. Yes, we have something dropping in October, something that we're all very excited about and we actually worked really hard on. And then our new album is well underway, and that will be coming out next year."

In an interview with Maine Music News, BUTCHER BABIES' Carla Harvey said: "We spent six weeks in pre-production and recording to make an album that gives us goose bumps every time we hear it.

"We all come from different musical backgrounds. I love old-school stuff like SLAYER, old METALLICA, I love PANTERA. [Our drummer] Chris [Warner], loves MARILYN MANSON. Heidi, my co-vocalist loves nu-metal. Henry [Flury], our guitar player, loves MESHUGGAH, and Jason [Klein], our bass player, loves death metal. So we managed to put all the different kinds of metal that we love into this album. It is so organic, and it sounds so good. We are getting tweets and Facebook messages all day long from our fans telling us how great it is. So besides what the critics say, what matters most is that we are proud of it and our fans are loving it."