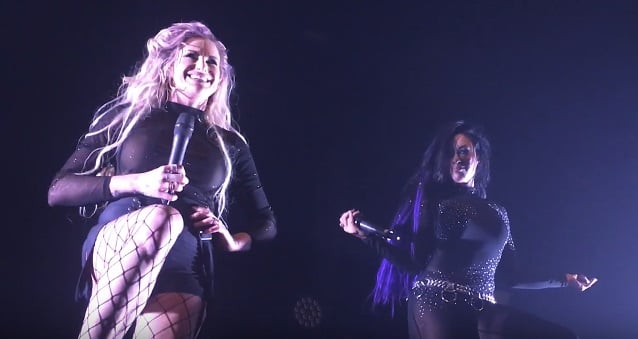 Central Mo News recently conducted an interview with BUTCHER BABIES frontwomen Heidi Shepherd and Carla Harvey. You can now listen to the chat using the SoundCloud widget below.

Asked if the music industry has become more accepting of female musicians in the years since the band first started out, Carla said: "I think they're more accepting because they have to be, 'cause there's so many powerful women in the industry right now." Heidi added: "Yeah, when we started, there weren't very many. And so they were, like, 'Oh, come on. You can't have two girls in a metal band. That's just bogus. And then, over the course of eight years, there have been several hundreds of bands come out with females in them — one, two, three, four, 10… it doesn't matter. And I think that it's definitely a lot more widely accepted. And within the industry too, I think that a lot of people recognize hard work and determination, and the fact that we weren't a flash in the pan, and we still aren't a flash in the pan, that, okay, we're here to stay. I think it's easy to dismiss something right away, but as you see the longevity behind it, it's making its way."

When questioned about the negative user comments that were posted below a previous BLABBERMOUTH.NET article in which Shepherd said she felt people still "oversexualized" her group, Heidi said: "The thing is, why would you even read that? Because, in all honesty, that site exists for people to go in and show how nasty they are. We are oversexualized — that's never gonna change. That's just how people are. I could go out wearing a fucking potato sack. I wear more onstage than most people wear to church. There are other women in this industry who wear way less than us, but for some reason, we're still the ones who are oversexualized. It's not gonna change. I don't care."

When the interviewer pointed out that some of the comments stem from the fact that BUTCHER BABIES used to perform topless with tape over their nipples, Wendy O. Williams (PLASMATICS)-style, Heidi said: "Well, yeah, I understand that. But [we only did that for] six months in 2011."

BUTCHER BABIES' third album, "Lilith", was released on October 27 via Century Media. The follow-up to 2015's "Take It Like A Man" was produced by Steve Evetts (THE DILLINGER ESCAPE PLAN, SEPULTURA, SUICIDE SILENCE) and marks the band's recording debut with new drummer, Chase Brickenden, who replaced Chris Warner last year.