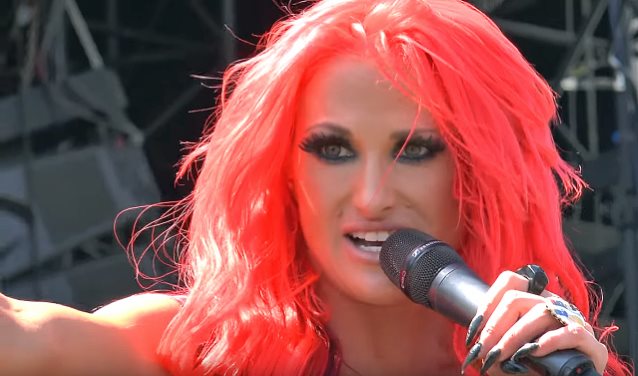 In a brand new interview with Houston Press, Heidi Shepherd, one of the two vocalists for the five-piece Los Angeles-based heavy-metal ensemble BUTCHER BABIES, was asked if she ever feels like the media just focuses on the band's sexuality and not its music. She responded: "Yeah. [The fact that we once wore nipple tape at our live shows for a short period of time] has been pounded into everyone's head. The thing is, it wasn't part of who we are. It was only for like, six months. Most journalists have dropped it, but every now and then, it pops back up. It's just beating a dead horse, you know? There are just so many more exciting things you can ask. It will always come up. I completely agree [that media focuses on our sexuality]. We were approached just a little while ago by this outlet... they were doing this YouTube TV thing and they wanted us to do an entire sex-ed thing for their little show. We [fellow BUTCHER BABIES singer Carla Harvey and I] responded immediately with, 'Absolutely fucking no.' [Laughs] We were, like, a) we're not even experts in that; and b) why would I go on TV talking about that? I have so much more to talk about and I have so much more [to offer], so many more things to say, you know? That really did bother us. Carla and I were, like, we don't even want to interview with you guys if you guys just want to air all this kind of bullshit."

Pressed on why she thinks women in metal have to constantly prove they're not posers, Heidi said: "Yeah, we did this interview yesterday, it was a radio interviewer, and we sit down and the first thing he says is, 'All right, so judging from how you look, you must be manufactured.' I almost got up and walked out. We were like, 'Uh, well, absolutely not.' I grew up in the pit. I've crowd-surfed since I was a kid in the pit, you know? You'll see me in my own show jump in the pit. When we saw LAMB OF GOD, I got in the pit. I still live in it. I try not to let that bother me. I'm out here trying to reach fans. Or just reach people who are passionate about metal. I try not to think about it. I won't let them define me or my future, you know? Don't let anyone else steal that from you."

Heidi also revealed that she feels "shunned" by some heavy metal fans today because of the way she looks. She said: "A lot of metal elitists, if you will, say stuff like, 'Look at her. She doesn't belong in metal. Look at her. She didn't grow up on metal. She couldn't possibly like metal because of the way she looks.' That's interesting now, currently, because this was the exact same people who accepted me [back when I first started getting into metal]."

BUTCHER BABIES' second album, "Take It Like A Man", was released on August 21 via Century Media. The CD was produced by Logan Mader, who has previously worked with FIVE FINGER DEATH PUNCH, DEVILDRIVER, CAVALERA CONSPIRACY and GOJIRA.