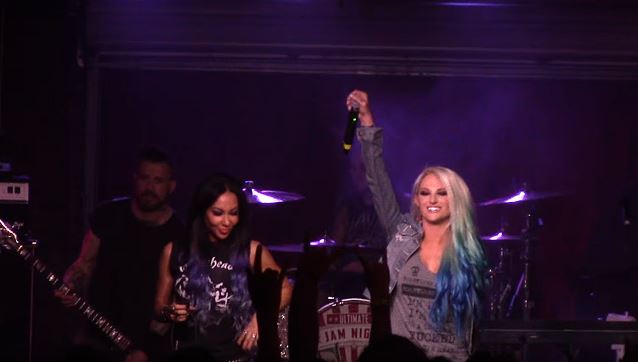 BUTCHER BABIES' second album, "Take It Like A Man", was produced by Logan Mader, who has previously worked with FIVE FINGER DEATH PUNCH, DEVILDRIVER, CAVALERA CONSPIRACY and GOJIRA. Carla stated about the CD's musical direction: "The majority of the album is very aggressive thrash metal. On this album, we wanted to go back to our roots, which were aggressive thrash, and ninety percent of the album is that."

Harvey told the the Fairfield City Champion that the mixture of the BUTCHER BABIES bandmembers' influences has helped them create a sound that stands out from the rest of the pack.

"We all have different influences, but collectively we could all agree that SLIPKNOT and PANTERA are our biggest influences as a band," said Carla. "I grew up listening to old-school thrash metal and classic metal and, of course, PANTERA; Heidi grew up listening to more nu-metal and stuff; our drummer also nu-metal. Henry listens to MESHUGGAH and heavier stuff and our bass player loves death metal. We put it all together and we make it something that is distinctly BUTCHER BABIES, I think."