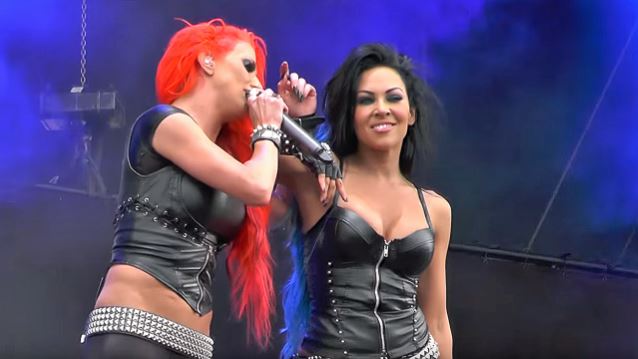 Ryze Up conducted an interview with BUTCHER BABIES frontwomen Heidi Shepherd and Carla Harvey on February 6 at Ground Zero in Spartanburg, South Carolina. You can now watch the chat below.

Speaking about the fact that BUTCHER BABIES have been steadily earning the respect of metal fans and other groups alike, Carla said: "When we first started this band, we didn't have a plan. We just wanted to play music with our best friends. We started off playing on the Sunset Strip [in Hollywood], covered in blood and just having a great time. And then we realized that we were doing something — we were making some noise, people were watching, and we realized that we could get our message out in the manner that we really wanted to. So we started to write music that was important to us, and we started to see the way that it was affecting people at our shows, with them singing back to us and watching the emotion in their faces. And we realized slowly that we were gaining respect because we were honest in what we were doing. People were believing what we were saying."

Added Heidi: "And we were doing what we wanted. You know, the thing is, so many times, especially as women in this industry, they try and tell you what you're supposed to look like, sound like, act like — everything. So, for us, we went out there and defied those odds and kind of just gave a big 'fuck you' to the music industry, and it made noise, because we're out there showing that it doesn't matter where you came from, what you look like, your race, your gender, the typical stereotype — it doesn't matter. You can love anything that you want to love, and you can be anything that you wanna be, and, to us, that was our biggest message."

Continued Carla: "And I think a lot of people who feel like the underdog in their daily life, they kind of grasped on to us, because they felt like we were kind of underdogs and we all fought together, you know."

BUTCHER BABIES' second album, "Take It Like A Man", was released in August 2015 via Century Media. The CD was produced by Logan Mader, who has previously worked with FIVE FINGER DEATH PUNCH, DEVILDRIVER, CAVALERA CONSPIRACY and GOJIRA.