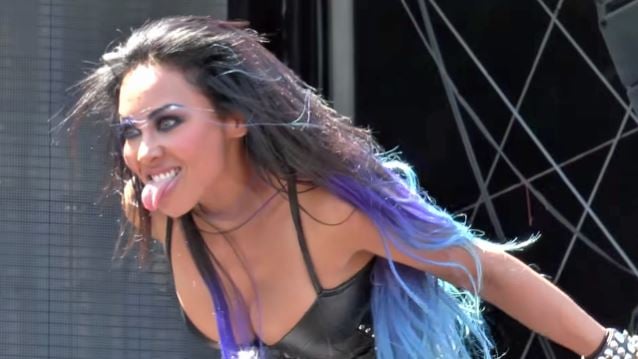 Hayley Leggs of TotalRock Radio conducted an interview with BUTCHER BABIES at the 2015 edition of the U.K.'s Download festival, which was held in June in Donington Park. You can now watch the chat below.

Speaking about the criticism BUTCHER BABIES receive from heavy metal fans who seemingly take issue with the sexy appearance of the band's frontwomen, Heidi Shepherd and Carla Harvey, Carla said: "There's always gonna be haters. We actually don't really play into the negativity, or read into the negativity. I think people are afraid of sexuality, especially Americans."

She continued: "I'm not ashamed of who I am, or what I look like, or what I've done in my life. And, you know, I'm just gonna be who I am. And I don't think that should detract, in any way, from what we're doing with our music, or what we wanna do. And I just think it' silly.

"I think most people that actually come to a live show and see us perform, they get it, and they know that we are a hundred-percent legitimate band that's going out there and doing what we do. And I think the most important thing is that we all grew up as metal kids, we all grew up in the pit, we love heavy metal, and we live, breathe and die for it. We're the real thing. And that's all that matters."

Carla went on to say: "How about more pretty girls at metal shows? How about that? Instead of wanting us to go away and stay at home or whatever… How about more girls in metal?

"The thing is, too, metal isn't… it's not about looks at all. None of us grew up… I mean, I was probably the most unattractive kid you could imagine. I was a complete, complete misfit, and metal… I found metal, and it kind of saved me, and the fact that I felt like all my misfit friends and I had something; we had something. And so now, when people say, 'Oh, you shouldn't be playing metal because of the way you look,' it kind of makes me laugh, because it's, like, I went to metal, because it doesn't matter what you look like."

Harvey added: "You know what? No matter what you look like, or if you're a male or a female, there's always gonna be someone who is going to try to break your spirit, tell you that you can't do something, tell you they don't want you to do something, and it's mostly people who are angry that they don't have the guts, the courage to get out there and live their own dreams. So… [extends middle finger to the camera]."

BUTCHER BABIES' sophomore album, "Take It Like A Man", was released on August 21 via Century Media. The CD was produced by Logan Mader, who has previously worked with FIVE FINGER DEATH PUNCH, DEVILDRIVER, CAVALERA CONSPIRACY and GOJIRA.