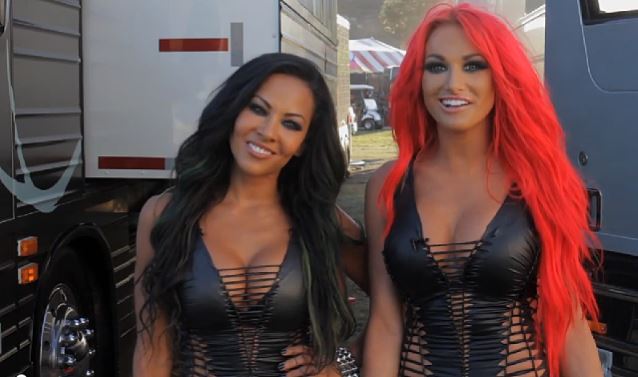 Revolver magazine conducted an interview with BUTCHER BABIES frontwomen Heidi Shepherd and Carla Harvey at last month's Knotfest in Devore, California. You can now watch the chat below.

Asked about the progress of the recording sessions for the follow-up to BUTCHER BABIES' debut album, last year's "Goliath", Carla said: "This time we're taking a different approach and working with [producer] Logan Mader [FIVE FINGER DEATH PUNCH, DEVILDRIVER, CAVALERA CONSPIRACY, GOJIRA]. We recorded our EP, 'Uncovered', with Logan, and it was almost a little scary for me personally, because Logan works so fast. I'm, like, 'Wait! Are you sure it's good enough? Are you sure the take was good enough?' But it's kind of nice to capture that, because I know that Heidi and I are best live onstage, and so he captures that raw energy."

Added Heidi: "It's gonna be honest, it's gonna be raw, it's gonna be heavier than 'Goliath', which we're actually really excited about — more thrashy. We all started as thrash metal kids in this, and we tried a bunch of different stuff. 'Goliath' was great, but this album we're gonna go and we're gonna slay 'Goliath'; that's just how it's gonna happen."

Continued Carla: "And the cool thing about working with [Logan] again is that he already knows our strengths, weaknesses and everything by having worked with us on a cover EP before we go in and record our album. I'm actually really thankful for that, so we can go in and just kick ass with him on this one."