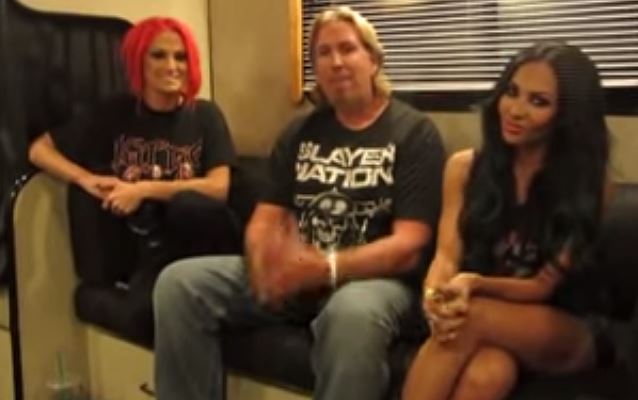 BUTCHER BABIES frontwomen Heidi Shepherd and Carla Harvey have taken issue with We Love Metal 's "Tournament Of The Metal Queen", calling it "offensive" and accusing the site of creating "animosity" and "competition" between females intead of honoring them for their musical merits.

"Tournament Of The Metal Queen" was created by the Nova Scotia, Canada-based We Love Metal site, which chose "32 of the heaviest and sometimes legendary women in metal" and entered them into a contest where fans have a chance to vote for one person to be named "The Metal Queen".

After being told of the "Tournament" by The Shepherd (no relation) of We Love Metal during an October 1 in-person interview outside Mojoes in Joliet, Illinois (see video below), Heidi stated: "I'm sorry, but that's not cool. We do appreciate the press from 'who's the queen of metal?' But it also turns girls against each other, it creates an animosity between these women who are fighting so hard to create a spot for [themselves] within [the] metal [genre]. And blogs like yours [are] turning girls against each other and creating competition where there isn't competition. You're actually going against everything that we're working for in that blog. I mean, you can keep it going and everything, but I'll take a stance and say, if you're not just honoring the girls and saying, 'Look at all these beautiful women who are creating something...' And it's not even about being beautiful, but it's about putting yourself out there and creating something that's different and going against the stigma of metal, where women aren't supposed to try, women aren't supposed to succeed. Yeah, it's great to honor that, but to throw them in a competition against each other?"

Added Carla: "Everyone's so different. Our metal's so different from, say, ARCH ENEMY or even what HUNTRESS is doing. We're all so different, so let's just celebrate us all in our own special way and not try to compare apples and oranges."

Heidi continued: "By saying 'Qeen Of Metal', that is [categorizing] us [as] a female-fronted band. We are a metal band, through and through, and we do have two females in it. Yeah, if you wanna add that — 'female fronted' — that is naturally what it is. But we aren't defined by that, by any means. We're a metal band. Nothing defines us by saying, 'Oh, they're females.' We don't define ourselves that way. We don't put in our blogs or our press releases that we're a female-fronted metal band. We're a metal band out of Los Angeles, California — a five-member metal band that happens to have two females in it. And, of course, anytime anyone mentions a female's name, it always [stirs up] some sort of controversy, so I understand you guys need it for hits and stuff like that. But, to me, and I talked to so many women in this industry, it's offensive to us. It's not just me, but so many of us."

Harvey and Shepherd performed topless with nothing but nipple tape on "for about five or six years" but eventually ditched the look because they "got tired of it." Heidi told Artisan News in a July 2013 interview that the image was "an ode" to Wendy O. Williams and THE PLASMATICS, who was the catalyst for BUTCHER BABIES' formation.

"Wendy O. Williams was the first female in heavy metal. She had that single, 'Butcher Baby', hence the name BUTCHER BABIES, and she was the first female to just really go balls out," she said. "She didn't care what anyone told her. We were both hugely influenced by her, and that's where the attire came from, too."

BUTCHER BABIES previously referred to their style of music as "slut metal," which Shepherd described to Revolver magazine as: "We can't go balls out — so we go tits out! When girls are perceived as sexual or outspoken, they get labeled sluts, but we embrace those qualities and bring them to our music as well. BUTCHER BABIES is true slut metal: We're doing what we want, how we want."

BUTCHER BABIES' "Uncovered" EP of cover tunes was released on September 30 in North America and October 6 in Europe.