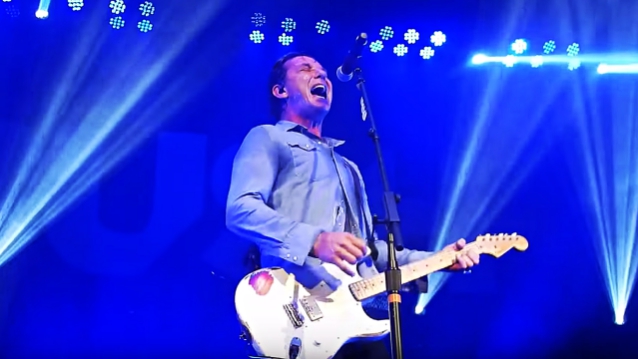 In a recent interview with Meltdown of Detroit radio station WRIF, BUSH frontman Gavin Rossdale spoke about the writing process for the band's forthcoming "The Mind Plays Tricks On You" full-length, which is tentatively due this fall. For the writing of the album, Rossdale teamed with film composer Tyler Bates, who has previously collaborated with Marilyn Manson.

"We had a good time making it," he said (audio below). "It's a really special record. 'Bullet Holes' [the album's first single, which is also featured on the 'John Wick: Chapter 3 - Parabellum' soundtrack] is one amongst many songs that I think people will love. Every record is special because it's a huge mountain to climb. It's a snapshot of your life at the time. Getting through the end of the record, every record I've done, it's true about them, it's a really big deal. It's just really special because we got a whole new team around us, we got a whole new army with us and it's been about a year now and to bring out a record with a whole new gang around us and some of the people as well, but different management, it's really gratifying. They're someone who believed in us before this record and now the spoils of the studio are coming out."

Rossdale then went on to discuss whether "The Mind Plays Tricks On You" serves as a "rebirth" for BUSH considering the group was disbanded from 2002 to 2010, and recently came back around to some of the heavier alternative sounds of its mid-1990s records. "In a weird way, every new record is a chance to be reborn," he said. "The previous record, 'Black And White Rainbows', I'm really proud of that record. It's sort of bruised. It's something about it — it's really an emotional record for me. This one is more like a true survivor, power and energy and some anger, exploration, living real life."

Rossdale also talked about the supposed "heavier" nature of the band's new output, which stems from the desire to beef up their live set with more guitar-driven songs. "Because so much of our life is on the road and so many times we wanted to think about the live set," he said. "It just helps, for me to write a mid-tempo kind of song going nowhere, there's no function to it. It's got to be next to 'Machinehead', be next to 'Comedown', be next to 'Greedy Fly', any of those songs, 'This Is War' from the last record. That means it got to be heavy."

BUSH is currently on the road with LIVE for "The Alt-Imate Tour", a co-headline summer run, which sees the two bands celebrating the 25th anniversary of their respective landmark albums "Sixteen Stone" and "Throwing Copper". The trek kicked off June 6 in Mashantucket, Connecticut and will wrap September 8 in Rochester, Michigan.