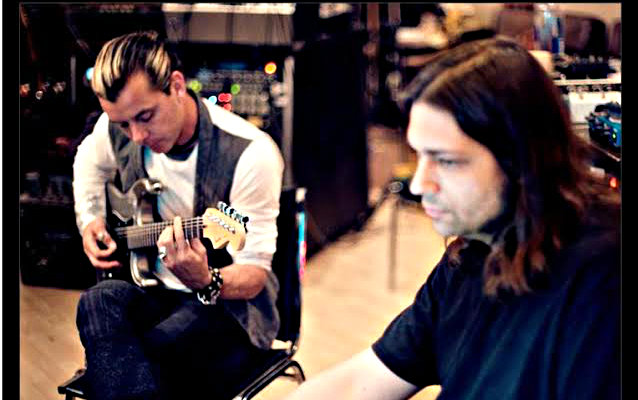 Alt-rock band BUSH is currently in the studio with Grammy-winning producer Nick Raskulinecz (DEFTONES, FOO FIGHTERS, ALICE IN CHAINS) recording the follow-up to 2011"s "The Sea Of Memories".

2014 marks the 20th anniversary of BUSH's debut album "Sixteen Stone", which hit No. 4 on The Billboard 200 and included the No. 1 hits "Comedown", "Glycerine" and "Machinehead", as well as fan favorites "Everything Zen" and "Little Things".

BUSH last year released "Live From Austin, Texas", an electrifying concert DVD featuring footage from an August 2011 sold-out show at Stubbs. The disc, also available on Blu-ray, features fan favorites "Machinehead", "Glycerine" and "Comedown" — along with new hits "All My Life", "The Afterlife" and "The Sound Of Winter".

BUSH made rock radio history with "The Sound of Winter", becoming the first band ever to hit No. 1 at Alternative Radio with a self-released single. The song appears on the group's most recent release, "The Sea Of Memories", which was the first BUSH disc to be released via the band's own imprint, Zuma Rock Records. "The Sound Of Winter" also holds the distinction of being the reunited group's first No. 1 single since 1999's chart-topping hit "The Chemicals Between Us".

Over the course of their career, BUSH has sold more than 16 million albums in the U.S. and Canada alone. They've also compiled an amazing string of 15 consecutive Top 40 hit singles on the Modern Rock and Mainstream Rock charts, including 11 that hit the Top 5. Five of these became No. 1 hits: "Comedown", "Glycerine", "Swallowed", "The Chemicals Between Us" and "The Sound Of Winter". In 2008, Rossdale returned to the top of the charts with his solo single, "Love Remains The Same", which hit No. 1 on iTunes and generated more than 1.6 million downloads.