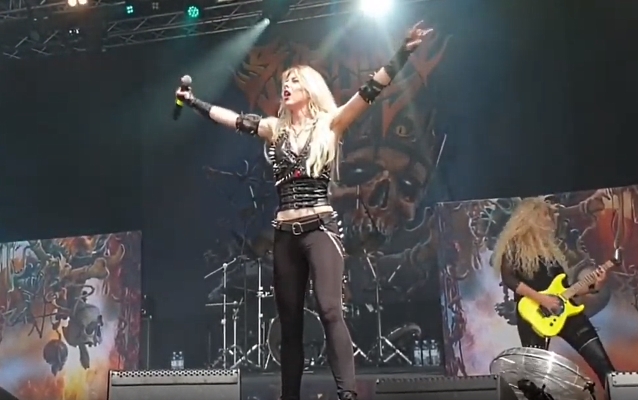 A two-camera mix of BURNING WITCHES' first live performance with new singer Laura Guldemond, which took place last month at the Sweden Rock Festival in Sölvesborg, Sweden, can be seen below.

"Sometimes there are things beyond our control that you don't see coming and are very disturbing. Nevertheless, the band will move on with all upcoming concerts and is working on album No. 3 already.

"We have had some very difficult weeks, so in these times of sadness and confusion, we are delighted to welcome our new witch Laura from the Netherlands into our circle.

"We also have the good news that we have decided to give the fans a special teaser and appreciation in the shape of a new song that we will release this week to debut Laura!

"Please read the following statements from the band and wish Seraina good luck for her future."

Seraina stated about her departure: "Dear friends, for personal reasons and after much deliberation I've decided to fully dedicate myself to my band DEAD VENUS and to leave the band BURNING WITCHES.

"For the last four years, I have had an incredible journey but I feel now that is the time to explore the challenge my own project is offering me.

"I would like to thank my family, friends and, of course, the fans for the incredible support. I also thank the band, the label and the management for all their help. There are a lot of beautiful experiences I’ll keep with me forever.

"My debut album of DEAD VENUS, titled 'Bird Of Paradise', will be released later this year. So my life remains exciting!

"I wish the WITCHES all the best and good luck for the future!"

Guitarist Romana Kalkuhl said: "This is, of course, a very sad moment for all of us. We have been very close for the last years and have reached a lot together. With great sadness we have to accept that Seriana wants to move on and we wish her the best of luck for that! Your time with the WITCHES will never be forgotten!

"For us as a band, it is important now to look into the new challenges and the new record — the show must go on!

"Yes, we are super thrilled that we have found Laura so quick over our Dutch connection Sonia. We know it is impossible to replace a great voice in exact the same way; that is why Laura is the perfect choice for us. She will bring in her own strength and personality into the WITCHES! We will not change the identity of the band; we will continue playing the music we love!

"Laura is an experienced and crisp vocalist with a big range and a crazy enough personality to be one of US! Please give her a warm welcome — she has already won many metalhearts at our first show with her at the Sweden Rock Festival! We will continue to spread the magic of the witches — thanks for all the support over the years!"

Laura said: "Dear BURNING WITCHES fans of the world, I am really excited and know I have big shoes to fill! I want to thank you that you give me this opportunity and the BURNING WITCHES for their trust and the warm welcome they gave me into their sisterhood!

"Being able to play the music I love, with great people, perform at those amazing shows and festivals and being supported by a fantastic team is a dream that came true for me. I can't really wish for more!”

"We are working our asses off at the moment to bring the magic to you all! Keep the fire burning! See you soon on the road and thanks for the support!"

"Hexenhammer" came out last November via Nuclear Blast Records. The disc was produced at the Little Creek Studio in Switzerland by the same team as its predecessor: V.O. Pulver (PRO-PAIN, DESTRUCTION, NERVOSA, PÄNZER) and DESTRUCTION frontman Schmier, who helped and advised as a close friend of the band.