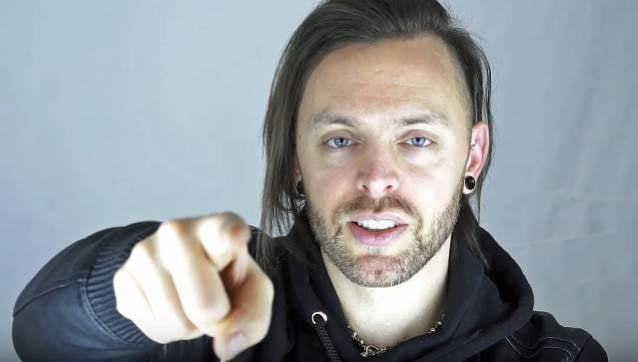 France's Loud TV recently conducted an interview with guitarist/vocalist Matt Tuck of Welsh metallers BULLET FOR MY VALENTINE. You can now watch the chat below. A couple of excerpts follow (transcribed by BLABBERMOUTH.NET.

On incorporating electronics into BULLET FOR MY VALENTINE's sound on the band's upcoming album, "Gravity":

Matt: "That's kind of the biggest sonic [difference], I think, people will notice from this album to anything we've done in the past. We just tried to elevate the band's sound to a completely different level. We experimented with layering different guitars and guitar-sound stuff, and it just didn't have the same effect. So we took that decision to start experimenting with synths and electronic software and stuff like that. And, yeah, it was an interesting experience; it's not something we'd done before, so we were kind of learning as we went. And we just had some fun with it and got weird with it and freaked ourselves out with it and then got it to a place where it is on the album now, which… It doesn't really take over anything; it's just kind of layers of sound backing up the riffs and the drums, really, so I think we've used it in a way which won't freak people out too much. It's definitely there, and it was something that we were very careful that we didn't overcook. But I think we've got a really good balance, and it just accentuates the band's parts even more."

On simplifying the song arrangements on "Gravity":

Matt: "Yeah, we kind of showcased the band's abilities from 'The Poison' to 'Venom', really, and we just didn't feel that we wanted to do that anymore. It just kind of felt like we were treading over old ground constantly and it wasn't really gonna propel the band to any new levels by writing that way anymore. It's obviously a part of the band which we hold dear in our hearts historically, but the time felt like now to do something different and be brave and not worry about what we think people wanna hear. It's what we wanna hear and where we wanna go; we write the songs and we're the artists. It was hard, 'cause we got a formula that had worked for many years and many albums, so to ditch that we didn't take lightly. And I don't think we ditched it as such; we just kind of evolved it. And it is a far more simpler record, but that was the point. It just gives everything a bit more of a bigger sound, and it makes the vocals and the vocal hooks shine through more so than ever without distractions from loads of hectic parts and guitar solos and all that kind of stuff. Which is great, and we'll always have that in our set, but this album, we wanted to make it far more focused and direct — bigger, simpler, anthemic. And that was the way we did it. When you simplify things, things become very clear how good and bad they are. So having all that space to have the vocal do its thing, it became very apparent how strong the choruses and the verses needed to be, and the vocal melodies and the performance part. Because it's so open, and the dynamics in the songs are so small and then big. It's a very hard thing to do, but getting the chorus right is the money shot in any song, and I think in most of these songs, if not all of them, there's a definite a chorus moment. Which is great — it's something that we've strived to achieve for a very long time, and I think on this album, we've achieved that more than ever."

"Gravity" will be released on June 29. The disc will be issued through BULLET FOR MY VALENTINE's new label home, Search And Destroy, the imprint launched in 2014 by Spinefarm and international artist management company Raw Power Management. The follow-up to 2015's "Venom" marks BULLET FOR MY VALENTINE's full-length recording debut with new drummer Jason Bowld (PITCHSHIFTER, AXEWOUND), who has been touring with the group for the past two years, and bassist Jamie Mathias (formerly of REVOKER), who joined the band after the last disc was completed.