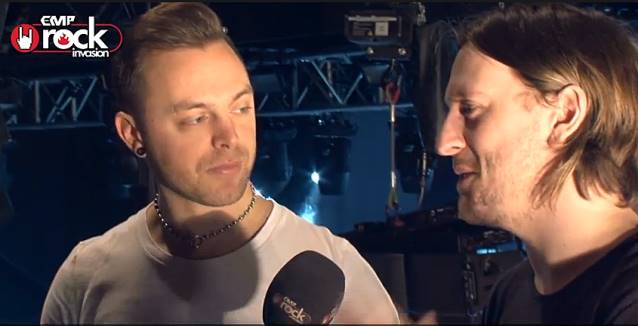 EMP Rock Invasion conducted an interview with guitarist/vocalist Matt Tuck and drummer Michael "Moose" Thomas of Welsh metallers BULLET FOR MY VALENTINE when they played at Palladium in Cologne, Germany on February 10. You can now watch the chat below.

On the progress of the songwriting and recording sessions for BULLET FOR MY VALENTINE's next album:

Tuck: "We've done five songs so far, and they're sounding very good. I don't know how to explain it, really… It's definitely more aggressive, edgier. It's definitely stepping back into the heavier side of what we've done in the past. And I don't mean that as in, like, a screaming way… just aggressive music, you know."

On how the band decides which direction to follow early in the songwriting process for an album:

Thomas: "It's usually… We just released [a new song called] 'Raising Hell' [in November 2013], so that's kind of like a benchmark for us to [follow]. Certain songs or certain parts of songs will catch us, and then that's the way we wanna write the rest of the record."

Tuck: "It just depends what comes out. When we're in the dressing room just writing, just playing guitar, a riff will come out and we'll be, 'Oh, that's cool. Let's continue that.' So we'll record a little bit of it. It's very natural. As soon as we get, like, two songs kind of finished, like we did with 'Raising Hell' and the other five, the wheels are set in motion; it becomes obvious where we need to go."

On the mixed response to last year's "Temper Temper" album:

Tuck: "I wouldn't change that record for anything, really. That's the record we wanted to make, and that's what we should be doing; we should be doing what we want, and we shouldn't be trying to please anyone else. If the next album we write doesn't get well received for whatever reason, then it's, like… you can't do things for other people. We've gotta do it for ourselves, and that's the only way we can stay true as a band. I think a rule that we've always stuck by since Day One was we do it our way and we do it what we wanna do or we don't do it at all. I think someone else fucking up your career is not acceptable. So if we fuck it up, at least you can sleep at night, you know what I mean? So we're extremely happy with it, and here we are today still rocking big venues around the world. So we [must be doing] something right, you know?!"

Thomas told Billboard.com about the direction of BULLET FOR MY VALENTINE's new material" "It's definitely more of a step towards our first two records."

He added: "We always like to keep changing our records and our sounds and stuff. I think you have to change, otherwise it gets boring for us and the fans get bored. Look at all the great bands through rock history; they changed on all their albums — especially METALLICA. Their albums have always changed, and they're the biggest metal band ever. So we just want to keep changing and get to another level each time out."