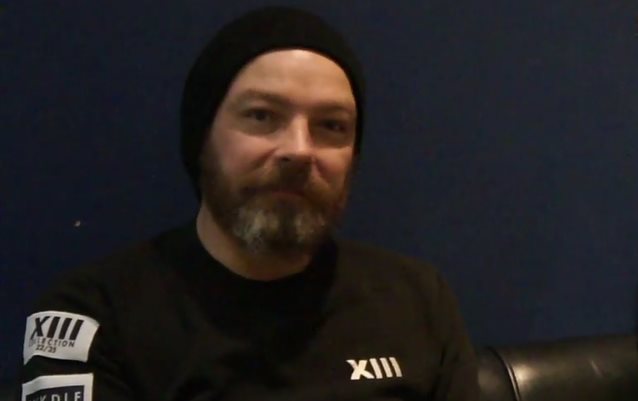 Dann of the "Mike James Rock Show" conducted an interview with guitarist Michael "Padge" Paget of Welsh metallers BULLET FOR MY VALENTINE during the band's current U.K. headlining tour. You can now watch the chat below.

Asked if BULLET FOR MY VALENTINE's decision to perform its 2005 debut album, "The Poison", in its entirety for the first time during this tour will have an influence on the musical direction of the band's next album, Paget said: "It might do, but as a band, we're always trying to evolve. I don't think you can ever stay in the same place. But, you know, I always kind of look back towards the early days when I'm writing stuff, because that was the record that really defined us as a band. Obviously, you can't write 'The Poison 2', but, yeah, it's definitely a massive influence on our writing. But who knows? After [the latest single] 'Don't Need You' [which came out in November] now and [last year's] 'Venom' [album]… I don't know… I just wanna finish this tour and stop thinking about music for a bit, and then let the creative juices start flowing once again and see what comes out."

According to Paget, the songwriting process for BULLET FOR MY VALENTINE's follow-up to "Venom" won't begin in earnest until sometime in the spring. "Especially finishing for Christmas, I think we all need a month or two off, at least, before we start writing any riffs or even thinking about making any songs," he said. "But it'll come. I'm sure once the New Year comes in, I'll back slowly going back up to the studio and getting some ideas down."

The guitarist also spoke in more detail about how the BULLET FOR MY VALENTINE albums take shape. He said: "I've got a studio in my garage, so I just go over on my own time. That's how 'Venom' was done — we did pre-production and all the demos at my garage. Me, Moose [Michael Thomas, drums] and Matt [Tuck, guitar/vocals] spent about two or three months up there, just went through songs and going through things and just making it as best as we can. And once we hit the studio, it was just bang-bang for eight weeks and we were done recording. Hopefully that process might happen this time, but, again, we'll see. But, yeah, definitely, I'll have a bunch of ideas before we even start writing."

BULLET FOR MY VALENTINE last month released a video for "Don't Need You". The clip was filmed in a church by director Ville Juurikkala, who has previously worked with NIGHTWISH, AMORPHIS, HIM, APOCALYPTICA and MICHAEL MONROE, among others.

BULLET FOR MY VALENTINE earlier in the year signed a worldwide deal with Search And Destroy/Spinefarm Records.

"Venom" was released in August 2015 via RCA. The CD marked BULLET FOR MY VALENTINE 's first release since the departure of longtime bassist Jason James and addition of Mathias (formerly of REVOKER).

Thomas took a temporary leave of absence from the band earlier this year to spend time with his wife, as they awaited the birth of his first child. He has since been replaced on the road by Jason Bowld (PITCHSHIFTER, AXEWOUND).