Welsh metallers BULLET FOR MY VALENTINE have released a festive-edition mead drink following the popularity of their Waking The Demon honey mead, which was made available last year.

Mead is the oldest recorded alcoholic drink and is surrounded by myth and legend, a drink of warriors and poets with acclaimed mystical properties.

Venom is available online as well as a variety of highstreet stores. Head to www.bfmvmead.com for further details.

Three months ago, BULLET FOR MY VALENTINE guitarist Michael "Padge" Paget told "The Ex-Man" podcast that the band will enter the studio before the end of the year to begin recording the follow-up to 2018's "Gravity" album. He said: "We're, I'd say, 85 percent [done] writing. We did a bunch last year. Obviously, we did fuck all this year. Matt's [Tuck, vocals/guitar] been down the last few weeks, down at my place, up in the garage, in the studio, so we've been demoing. I think we've got about five or six in the last few weeks as well — four or five, maybe — to add to the list. There's about 20 songs, but we're weeding out the [best] ones [for the album]."

As for the musical direction of the new BULLET FOR MY VALENTINE material, Paget said: "It's heavy as fuck — it's, like, the heaviest BULLET stuff you've ever heard, which is cool. Everyone's vibing. [Matt is] cool. I'm cool. The [rest of the] boys are cool. It's just we need to get out of this [pandemic] situation we're in so that music carries on and we can put on shows again. Same as everybody else that's in the same situation."

This past May, Tuck told Rock Sound that the new BULLET FOR MY VALENTINE songs were turning out "pretty brutal." He added: "It couldn't be more of a contrast with 'Gravity' in a ferocious style. It's very technical. I don't know why. You've just gotta go with what you wanna go with — as a band, as a musician, as a songwriter, you've just gotta go with what's floating your boat, and this time around, the heavy stuff is just coming out in masses. The riffs are crushing. There's probably 60 percent aggressive vocals, 40 [percent] clean, which is a ratio we've never really dabbled with before. It's very heavy, it's very technical. For the BULLET fans out there that kind of like that side of this band, it's very cool and very exciting. It feels good."

Tuck went on to say that the initial studio sessions for BULLET FOR MY VALENTINE's next album were being overseen by Carl Bown, who previously worked with the band on "Gravity" and 2015's "Venom".

Two years ago, Tuck told France's Loud TV that BULLET FOR MY VALENTINE "tried to elevate the band's sound" on "Gravity" "to a completely different level. We experimented with layering different guitars and guitar-sound stuff, and it just didn't have the same effect. So we took that decision to start experimenting with synths and electronic software and stuff like that," he explained. "And, yeah, it was an interesting experience; it's not something we'd done before, so we were kind of learning as we went. And we just had some fun with it and got weird with it and freaked ourselves out with it and then got it to a place where it is on the album now, which… It doesn't really take over anything; it's just kind of layers of sound backing up the riffs and the drums, really, so I think we've used it in a way which won't freak people out too much. It's definitely there, and it was something that we were very careful that we didn't overcook. But I think we've got a really good balance, and it just accentuates the band's parts even more."

"Gravity" was released in June 2018 through BULLET FOR MY VALENTINE's new label home, Search And Destroy, the imprint launched in 2014 by Spinefarm and international artist management company Raw Power Management. 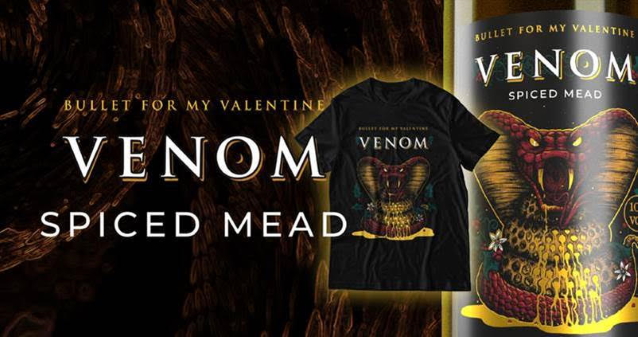