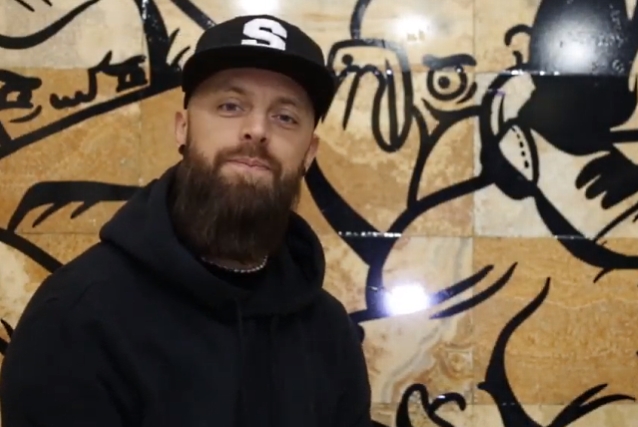 MM Storytime conducted an interview with BULLET FOR MY VALENTINE frontman Matt Tuck prior to the band's April 3 concert at Dom Omladine in Belgrade, Serbia. You can watch the entire chat below. A few excerpts follow (transcribed by BLABBERMOUTH.NET).

On BULLET FOR MY VALENTINE's current position in the metal/hard rock scene:

Matt: "Since 'The Poison', we've been kind of a self-sufficient band. We haven't really had to do a lot of the support slots that we didn't have to do. We've done stuff because we've wanted to do it with the bigger acts like SLIPKNOT and METALLICA and stuff. We've been very lucky in that we've been a headline act pretty much globally since 'Scream Aim Fire', something like that. I think we're still quite relevant. We're still doing big world tours, selling out huge places in some territories around the world. It's good. Business as usual. Just doing our thing."

On whether there's anything about BULLET FOR MY VALENTINE's career he would change:

Matt: "Not really. I think everything is for a reason. Everything we've done has been decisions we've made. We haven't been influenced to write an album in a certain way by our management or record labels. We've done everything. Even the stuff that hasn't gone as well has been on our terms and we're quite happy with that."

On the band's musical development:

Matt: "The band has evolved musically. It was 2003, we started recording, which is a long time ago. We've grown up massively as people and as musicians, our tastes have changed. Everything has changed — our playing, everything. We are completely different people now. We still have that love of music and being in a band. The evolution of the band musically is something I think is very natural. I don't think anything stands out too dramatically from the next record. It always has the DNA of BULLET in it, but we always want to make our albums different from the last one. We're certainly very conscious of trying to keep the essence and DNA of the band in the music and trying to evolve it so it keeps us interested and hopefully keeps the fans interested as well, rather than writing the same record after record. The next album we write will be our seventh, unbelievably and I think if we hadn't done that, then we might not be here today. I think a lot of bands fall into the trap of doing the same old shit, which is fine if you want to do it, but it's something we've never been interested in. We've always wanted to challenge ourselves as musicians."

On 2005's "The Poison" and what his favorite BULLET FOR MY VALENTINE album is:

Matt: "It's hard to pick a favorite. 'The Poison' has so many amazing memories attached to it and what that album did for our band was set us on our journey for life now. It's an incredible time to look back. At the time, we didn't realize anything, we were just going along with it. Obviously, 'The Poison' is a very special record for us and our fans for multiple reasons. But I think as a piece of work and songwriting, I think 'Gravity' is the strongest album we've ever written. It's the most dynamic and complex lyrically and stuff, and I think it's got the catchiest melodies and strongest concept. For me, it's my favorite."

On the personal nature of "Gravity" and its sound:

Matt: "I'm super proud of it. I'm super proud that we were brave enough again to do a record that was different from our last record. 'Venom' was a very thrashy, technical metal record. It was, like, 'We can do that again or do something different, so let's do something different and challenge ourselves.' So that's what we did. I think, personally, we succeeded massively. I think the album sounds incredible. It's a lot more simplistic, a lot more simple than 'Venom', but the sound sonically is far bigger because of that, which is something we were really looking for. I put my personal life into that album more than ever was a challenging experience as well. Again, looking back, I'm super proud we did that. I think the album is super strong because of it. Some people disagree, but that's music. I write from my heart. Like I said, I think it's the best album I've ever written because of that. Everyone has their opinions."

On whether BULLET FOR MY VALENTINE will continue in the vein of "Gravity" on their next album:

Matt: "We haven't really started thinking about it. We started writing a couple weeks ago, but it's far too early to tell where it's going to go. It's a long journey when you make a record. You have these ups and downs, then you have doubt, then you're like 'This is it! This is it!' Then a week later, you hate it. How it turns out, I don't know. Obviously, it's not going to be the same as 'Gravity' because that's not what we do. Writing albums differently from each other, it gives you that platform and the door is open to go elsewhere. It's exciting for us now because we know we can do something else again. We're not stuck in this trap of having to write the same record a million times."

"Gravity" was issued in June 2018. The effort was made available through BULLET FOR MY VALENTINE's new label home, Search And Destroy, the imprint launched in 2014 by Spinefarm and international artist management company Raw Power Management.