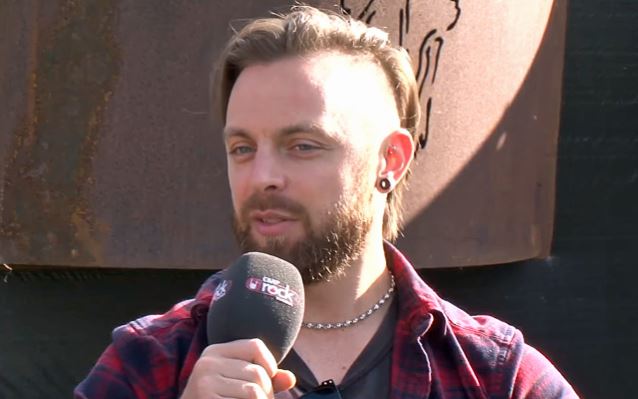 In a recent interview with Germany's EMP Rock Invasion, Matt Tuck of Welsh metallers BULLET FOR MY VALENTINE was asked for his opinion on Brexit, which refers to Britain's decision to leave the European Union, an economic and political partnership involving 28 European countries.

Tuck said: "Yeah, it's all a bit of a mess, really, isn't it? I was away when the vote happened, on holiday with my little one, so I didn't actually vote, so it's not my fault. Well, it kind of is my fault for not voting, I guess; it worked both ways. But, yeah, it's all a bit messed up. I think ultimately it was a referendum to gauge where the British public wanted to be, and that's kind of all it is. And now there's all this pressure to initiate it when that was never the… that's never what a referendum is; that doesn't mean it's happening. If they could redo that, it would be a very different story."

While the Brexit vote merely signalled the British public's wish to leave the EU, it did not in itself actually set the process in motion — that only begins when Article 50 of The Treaty of Lisbon is triggered.

"There's no real major positives to come from it," Tuck noted. "And there's an argument saying, 'Unless it happens, then you'll never know,' which I totally get. And some of the arguments are good and make sense. But a lot of it was just hearsay."

The band's latest album, "Venom", was released in August 2015 via RCA. The CD marked BULLET FOR MY VALENTINE 's first release since the departure of longtime bassist Jason James and addition of Jamie Mathias (formerly of REVOKER).