Welsh metallers BULLET FOR MY VALENTINE will return to North America in 2016 for the "British Invasion" tour, also featuring opening band ASKING ALEXANDRIA. Tickets will go on sale September 25 to the general public.

BULLET FOR MY VALENTINE's fifth studio album, "Venom", was released on August 14 via RCA. The CD marks the band's first release since the departure of longtime bassist Jason James and addition of Jamie Mathias. Jamie, who has been playing and touring in bands for the last ten years, fronted the band REVOKER, which released an album, "Revenge For The Ruthless", in 2011 on the Roadrunner label.

Produced by Carl Bown and Colin Richardson (SLIPKNOT, MACHINE HEAD, TRIVIUM) at Metropolis Studio in London, "Venom" is described in a press release as "an unrelenting, fierce step forward for BULLET FOR MY VALENTINE" and the band's "heaviest record to date."

"We've got massive hopes for this album," guitarist/vocalist Matt Tuck told Kerrang! "We truly believe it's going to be the biggest metal record of the year. We've had these feelings in the past and we've always been spot on, but this one feels way more special than anything else we've ever done, so, fingers crossed, it's going to do what we want it to do."

BULLET FOR MY VALENTINE recently supported SLIPKNOT and LAMB OF GOD on this summer's North American tour.

ASKING ALEXANDRIA guitarist Ben Bruce wrote a lot of the lyrics on the band's forthcoming album about the group's former singer, Danny Worsnop, but ended up re-writing them at the urging of Danny's replacement, Denis Shaforostov.

In an interview with BryanStars, Bruce stated about the upcoming CD: "We've never gone into a studio thinking, 'We wanna write this, this, this, this.' We just always go in and write whatever feels right. I'll sit down and just play, and whatever comes out, that's what this album's gonna sound like. But one thing that was a huge, huge difference — which was really refreshing — is Denis was really involved with the writing. He would critique me, he would give me ideas, he'd be, like, 'I've heard you do better. Do better.' And he really, really pushed me, whereas Danny would just kind of not do anything. I'd send him the songs and he'd be, like, 'That's shit. I don't like it. It's too heavy. And then, 'If I have to do it, I'll do it.' So there wasn't much interaction between me and Danny. But with Denis, he was very hands-on. He wasn't in the country for a lot of it, so we did a lot of Facetime calls, a lot of texting, a lot of mobile calls and stuff. He was really involved, so I think that's just made for a better and more well-rounded album, especially because he was a fan of the band before. So I'd send him something and he'd be, like, 'Dude, I've heard you do better than this. This is not your best work,' which was awesome. So I definitely think this is the best ASKING ALEXANDRIA record that we've ever written. I think old fans are gonna love it. I think new fans are gonna love it. I just don't see how you can't. I hate sounding cocky, but it's so good, I listen to the songs and I'm singing them — they're stuck in my head — which is something I've never done with our records before."

Asked how ASKING ALEXANDRIA's forthcoming album compares to some of the band's earlier efforts, Bruce said: "I think there are some huge arena-rock songs — just massive songs that I can just see in an arena just thousands of people singing every word from start to finish. So they're not heavy, but they're just great, great songs. But, for the most part, the record's actually a lot more similar to [2011's] 'Reckless & Relentless'. We've brought a lot more of the electronic influence back. Obviously, [2009's] 'Stand Up And Scream' is very electronic-driven, and we've brought a lot of electronics back. Not in the same way — it's not techno or anything like that — but there's a lot of electronic sounds and ambience and stuff, which is really cool. I don't know… We wanted to feel young again. So I sat down with Joey [Sturgis, producer] and I listened to 'Stand Up And Scream' from start to finish, and I listened to 'Reckless & Relentless' from start to finish, and I was, like, 'These albums are sick, man. I miss that raw energy, that aggression, that passion that we had.' So I think we've brought a lot more of that back into this new record." 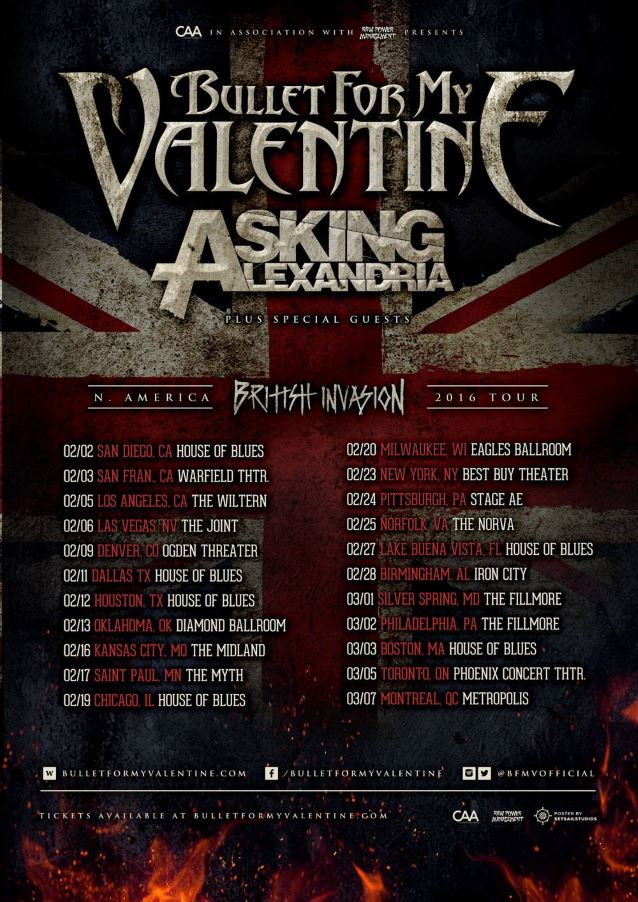