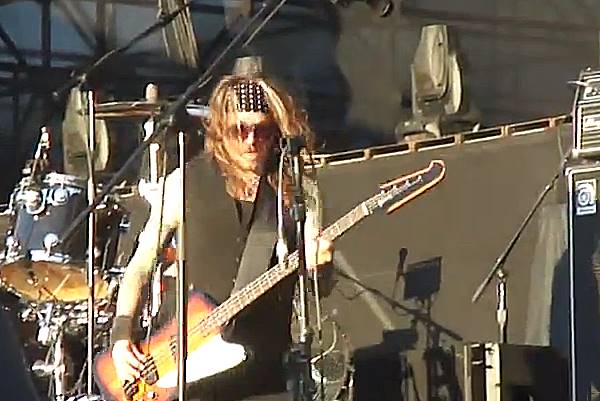 Video footage of Californian rockers BUCKCHERRY performing with their new touring bassist, Kelly LeMieux (pictured above; FEAR, PAUL GILBERT, MD.45), on October 20 at the Monsters Of Rock festival in São Paulo, Brazil can be seen below.

BUCKCHERRY announced last week that it had parted ways with its longtime bassist Jimmy Ashurst. The band explained in a statement: "We felt it was in the best interest of the collective group to find a replacement for Jimmy, for the good of the group as well as the good of Jimmy. This was communicated to him very clearly and with much respect. He was given the opportunity, after many years of freely voicing his extreme level of unhappiness on a daily basis, to step aside. He chose to stay and remain in a situation that not only wasn't working for him, but also was beginning to diminish the collective happiness, creativity, and progress of the band. That, to us, was unacceptable.

"We feel our fans deserve a band in which all five guys you pay your hard-earned money to see actually want to be there and are grateful for the opportunity play music. Regardless of half-assed, sideways social media posts to the contrary, that was no longer the case for Jimmy based solely on his actions and daily conversations with him over the past few years."