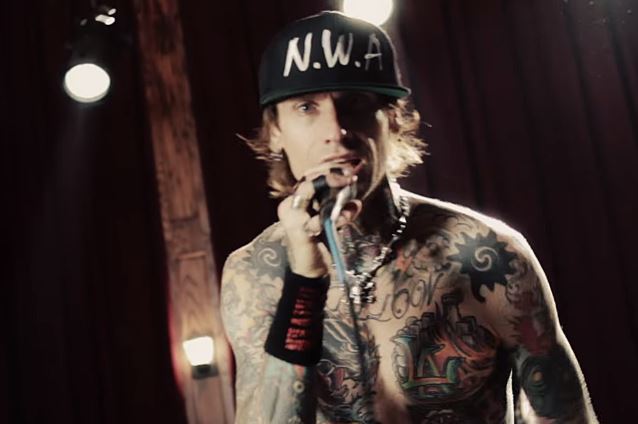 JZ of FM94's "The Dark" radio show recently conducted an interview with BUCKCHERRY frontman Josh Todd. You can now listen to the chat in the YouTube clip below.

Speaking about the state of rock music in 2016, Todd said: "I think rock is in a place that it's in right now for a reason. I don't wanna diss on any bands that are in rock making new music and think their band is the best, because that's the mentality you need to have. But personally, I just think that rock is really muddy and kind of forgettable, and it's not fun anymore. And I think that needs to change."

He continued: "The great thing about rock back in the day was you could put on an AC/DC record and it's timeless. You can listen to 'Back In Black' now and it's as great as it was twenty years ago, and it's because you can dance to it, you can screw to it, you can party to it, and that's what was fun about rock.

"Sometimes I listen to rock radio and I'm, like, 'God, all this is so depressing,' and there's no more guitar heroes, and there's not a lot of great, charismatic frontmen where all they do is sing and perform and they don't have a guitar strapped to them and they're using their whole bag of tricks.

"I think that's why everybody's moving towards electronic music and pop music; that's where they get that feeling. So rock is really hurting right now because of that."

The singer, who recently launched a side project called SPRAYGUN WAR, went on to say that the new rock bands lack the excitement of the classic artists that he grew up listening to.

"I just think it's boring. I think it's forgettable," Todd said about the music that is being played on active rock radio. "That's the problem I have with it. Every band sounds like it's running into the other band, and there's not these timeless melodies anymore that define your summer when you're a teenager."

He added: "Listen, we make records for young people; that's what we do. Because when you start getting older and you start getting into the workplace, music isn't defining who you are anymore; you start becoming an adult and you have adult responsibilities. It's not what it was when it is when you're in high school and everything matters and your body's changing and you're trying to get the girl and everything's going on with you. That's when music means the most. So, for me, when I listen to it, I always ask my 15-year-old, my 17-year-old self, is this something that I would be into, that I could attach myself to? And the answer is no."

BUCKCHERRY will embark on the "15" anniversary tour this fall with special guests CANDLEBOX and SONS OF TEXAS. In addition, the band's platinum-selling "15" album, which originally came out in 2006, will be made available on vinyl for the first time. There will also be a deluxe CD reissue of the album that will include bonus material.

"15" was released in April 2006 and included breakout radio anthems "Crazy Bitch" and "Sorry". The album was a turning point for the band following a breakup after the release of their second album, "Time Bomb", and featured a reinvigorated lineup with three new members.