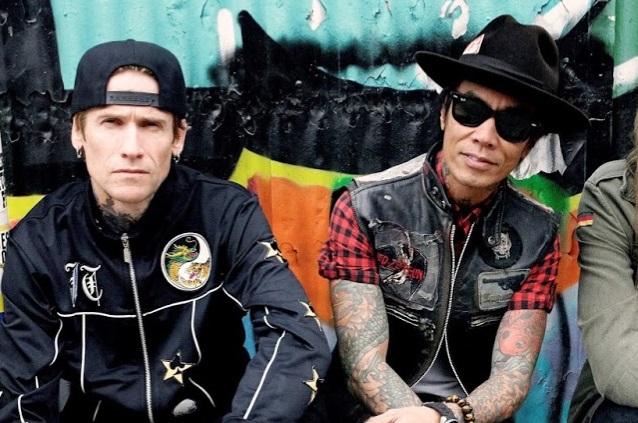 On November 4, Garret K. Woodward, arts and entertainment editor for The Smoky Mountain News and Smoky Mountain Living magazine, conducted an interview with BUCKCHERRY and JOSH TODD & THE CONFLICT members Josh Todd (vocals) and Stevie Dacanay (a.k.a. Stevie D., guitar) backstage at Capone's in Johnson City, Tennessee. You can now listen to the chat in two parts below.

Asked how much of what they imagined the rock and roll lifestyle to be when they first started out turned out to be "bullshit" once they got a taste of success, Josh: "I never thought about the rock and roll lifestyle. That's not why I got into this game. My professional career never really started happening until I got sober, so I haven't dealt with that professionally, as a far as being a paid musician. I kind of did it and got it out of my system before it all happened for me. I don't think it would have ever happened if I kept getting loaded.

"I think what [turned out to be] different for me when we finally had [some success] is [I found out that] it's a lot of work," he continued. "It's like a full-time job. And the traveling… there's a lot of stuff that goes into it, a lot sacrifice as far as friends and family. There's a lot of solitude that comes with this. You think it's all great and you're on the stage and everybody loves you, but your downtime is sitting on a fucking bus all day, you're away from your friends and family. And once you're out here for a long time, and we've been doing it a long time, your friends are on one hand, because everybody is getting on with their lives, and you're never around."

Added Stevie: "The circle's definitely very small. This whole thing has been a vehicle for us to provide for our families, get homes, cars and all that, and guitars. That was something that I imagined comes along with the success. But I didn't realize how much… When you get to a platinum status, the machine is running itself. [But] when you get to, let's say there's a middle class in this whole hierarchy, it's very hands-on [and] there's a lot of work. There was so much that I didn't even know about… 'cause my role had changed from BUCKCHERRY to THE CONFLICT. So now I'm involved with merch and I'm curious about the numbers at the end of the night, because the bottom line is important to a business, and that's what you're running."

JOSH TODD & THE CONFLICT's debut album, "Year Of The Tiger", was released on September 15 via Century Media. The disc was co-produced by Dacanay and STONE TEMPLE PILOTS drummer Eric Kretz.