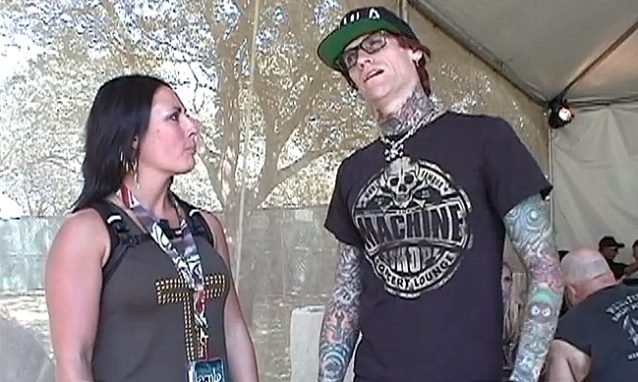 Sara Meek of In The Now Magazine conducted an interview with singer Josh Todd of Californian rockers BUCKCHERRY on September 14 at the Aftershock festival at Discovery Park in Sacramento, California. You can now watch the chat below.

BUCKCHERRY's sixth studio album, "Confessions", sold 18,000 copies in the United States in its first week of release to land at position No. 20 on The Billboard 200 chart.

"Confessions" was produced by Keith Nelson and Marti Frederiksen (AEROSMITH, OZZY OSBOURNE) and features eclectic CD artwork by graffiti artist Ewok. The songs on "Confessions" merge punk grit, gutter attitude, honest storytelling, and razor sharp hooks, while the lyrics are tied together by the underlying theme of the Seven Deadly Sins.

In a recent interview with Loudwire.com, Todd elaborated on the album's subject matter. Josh explained, "There was a point in my life when I was a youth when I lost a family member and I acted out in my grieving process through the deadly sins, so that's kind of what the story's about on the record. I think the seven sins are timeless and that everybody struggles with them in their daily lives all the time."

The provocative video for the album's first single, "Gluttony", was directed by Billy Jayne and filmed in a North Hollywood church.

A two-disc deluxe version of the "Confessions" CD is also available and features the bonus tracks "Give 'Em What They Want" and "When The Fire Starts". In addition, a bonus DVD includes the "Gluttony" music video and lyric video, behind-the-scenes footage and band interviews from the set of the "Gluttony" video shoot, and "The Story Behind Confessions" featurette.