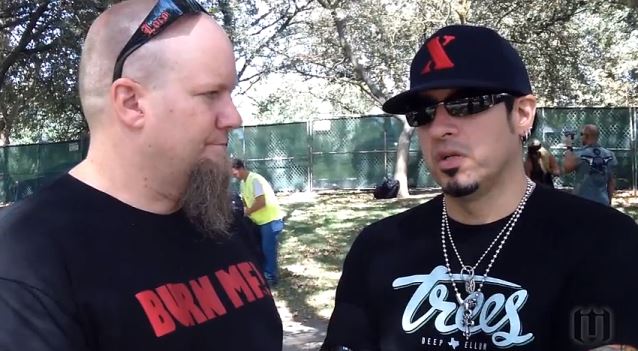 The Metalluminati conducted an interview with drummer Xavier Muriel of Californian rockers BUCKCHERRY on September 14 at the Aftershock festival at Discovery Park in Sacramento, California. You can now watch the chat below.

Asked about his views on illegal music downloading and bands relying on the Internet to be heard by the masses, Xavier said: "I feel sad for the generation that we're in, because of the fact that everything is go instant gratification, point and click. With the whole social awareness of going to see a concert and meeting new people and what are you wearing and what's the trend, that's where we all came from. So it's kind of sad, but at the same time, when you have such a massive elevation of technology, this is what happens."

He added: "As far as the downloading thing, to me, do we all want the money in our pockets? Well, absolutely. We're not out here just for fucking shits and giggles. But at the same time, if people get your music, people get your music, and that's why you kind of do it in the first place. So it's kind of like a double-edged sword. But with technology and the way things move on, you've kind of gotta roll with the punches, and if you don't, then you're gonna get left behind."

Xavier also commented on the increased importance of touring for rock bands like BUCKCHERRY compared to how it was when the group first started out.

"In the specifics of rock and roll, back in the day day, securing a record label and then getting a half-a-million-dollar deal and then a two-hundred-and-fifty-thousand video budget and all that shit, it was great, because it sounded great coming out of your mouth," he said. "But you still have to pay that back, regardless of what happenes. Nowadays, a lot of us, our moneymaker is touring and merchandise, because record sales aren't what they used to be.

"You have a completely other genre, which is hip-hop and pop and all that stuff, that sells what they do and why they do and how they do, but at the same sense, to me, there's no origanicness. You go to see these shows and it's just like, 'Wow, I should have just stayed home and watched the video.'

"For most rock bands, selling records is a difficult thing; if you're not the major icons, it's hard. So for us, it's getting out there and promoting ourselves and doing whatever we can. And we've been doing it for eight and a half years now straight — since August of '05. When I say we literally have not stopped touring and making record, we haven't. In almost a decade, we're still doing what we're doing."