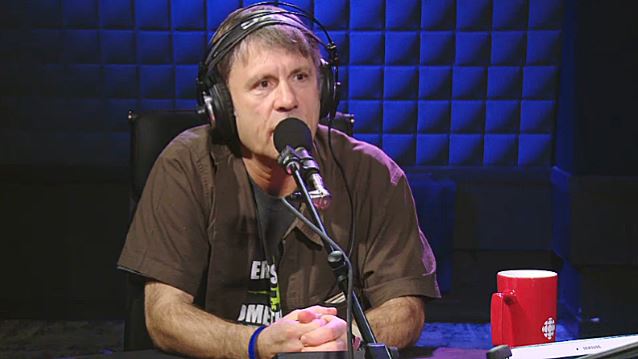 Shad of CBC Radio One's arts and culture program "Q" recently conducted an interview with IRON MAIDEN singer Bruce Dickinson. You can now watch the chat below. A couple of excerpts from the chat follow (transcribed by BLABBERMOUTH.NET).

On the lyrical themes covered on IRON MAIDEN's new album, "The Book Of Souls":

"I don't think we could get into huge concepts… Well, we didn't get into huge concepts on the album. Every song was its own little world. And there's only two of us in the band, really, that write lyrics — myself and Steve [Harris, IRON MAIDEN bassist]. So, generally, if Steve co-writes a song, he tends to write the lyrics, unless he writes the song with me, in which case I'll probably write the lyrics, or we may write between us or whatever. So four out of the ten or eleven songs are my lyrics and the rest of them are Steve's. You know, his lyrics have changed over the years, and, obviously, 'cause I've been singing them, I've noticed the way that his use of language has started to change and the more, kind of, personal nature of some of the subject matter has become a little bit more… There's a little bit more nakedness going on there.

"I think, as we've been going down the track — yeah, we're all getting older and everything and all the rest of it — we've lost a few friends along the way. I mean, some of them were in quite early days — back in the '80s — but recently the rate of loss, sadly, tends to accelerate the further down the track you go. And I think people start to feel their own mortality a bit and you start to bring that into the music a little bit. As I say, I don't wanna do too much talking about his words, 'cause they're his words, but I sing them, so I do get a kind of a vibe off them that's a little bit different on this record."

On IRON MAIDEN's musical evolution over the years:

"The trouble is, when you inhabit being in a band like MAIDEN and you see what the individual musicians are actually capable of, when they're just messing around and not being recorded, you think, 'Wow! There's so much more stuff that we could do.' It's just a question of getting us to do it all at once in the right place at the right time, with the right kind of feel, and just capture that. And that's the problem — albums don't come around that often these days. Getting everybody together in one place in the right mood… And it really is down to stuff like that. If you look at bands' early careers — I mean, everybody from… you know, major bands — they crack out one, two, three, maybe four records maybe in as many years or less, and that stuff is — if they're really successful — that will be the bedrock of the next twenty-five years, if they carry on for that long; they'll still be playing some of those songs twenty-five years later, because that's it. And after that, it's extremely hard — it gets kind of exponentially hard — to create that same excitement. So you either have to wait thirty years before you do a record or something else like that… But if you want to keep doing records, it's very hard to come up with things that feel genuinely different. Most times, it's because it's about an emotional state which everybody has to be in — everybody has to lock in and [be] in synch and the sound has to be right and everything has to be… so that you can just play in a way that sounds special in a relaxed and, sort of, human way. It's easy to make stuff, kind of, by numbers, and it gets easier the better you are. The better the musician that you are, the easier it is to make soulless, rubbish music. If you take a bunch of kids that are playing right at the edge of their abilities, there'll be an excitement and an energy that comes off them that the old duffers in the next-door studio just won't be able to replicate. So the key is, how do you get the old duffers in the next-door studio that have got all the chops to actually get the essence and the feeling and the soul back into it? I mean, in the case of somebody like THE ROLLING STONES, they take six months to do a record… We don't really have that luxury. I suppose we do, but, to be honest with you, I'd get bored if I was doing that — I really would. [I'd go], 'C'mon, guys!' You know? But, on this one, we did a little bit of jiggling around, a little bit a change of pace, a change of attitude, a change of studio... A great studio, a really comfortable old-school vibe… old-school vibe with all the new technology available, but it was all behind the curtains, so you could just pretend it didn't exist. We even had tape machines in there — old 24-track tape machines and things. There was no tape on them, but they were just there, so you could kind of look and go, 'Ah, I feel really comfy now. I think I'm back in, like, 1978.' And that just adds to the whole atmosphere."