Grove began his career at age 13 and has been working in his craft for 15 years. Jamie's resume includes his work on such films as "The Devil's Rejects", "Halloween", "Halloween 2", "The Hills Have Eyes 2", "Hostel 2", and his current work can be seen in the new "Robocop", "Captain America 2", and all of the "Iron Man" movies.

"The Flesh Mechanic" features Dino Cazares of FEAR FACTORY as a special guest actor. Cazares stars as the "Flesh Mechanic victim" and is subjected to many horrors! Cazares says: "It was a honor to be a part of the BROKEN HOPE video. I had a great time getting bludgeoned in the head with a severed arm then getting my face sliced off with a dull knife."

BROKEN HOPE's Jeremy Wagner adds: "I'm so excited and happy about 'The Flesh Mechanic' video! This is only the second music video we've ever done (the first was 'Into The Necrosphere' in 1995), and it truly captures the horror and brutality of the storyline and the music.

"It was a pleasure working with my friend Corey Soria. Corey is a brilliant director and he has the best video and camera crew. Moreover, Corey has a genuine passion for horror and death metal, so this collaboration couldn't have been more perfect. Even more amazing is the fact that FX-god — Jamie Grove — stepped in to do ALL the horror/gore FX, but he also stars as the actual 'Flesh Mechanic' character! Jamie Grove brought in a mountain of props, a stellar FX crew, and his evil acting skills to 'The Flesh Mechanic' video set, and made our music video look like a million-dollar horror movie!

"The Flesh Mechanic" comes off BROKEN HOPE's sixth album, "Omen Of Disease", which sold around 1,000 copies in the United States in its first week of release. Issued on October 1 (September 30 internationally) via Century Media Records, the CD's drum tracks were laid down at Belle City Sound in Racine, Wisconsin with engineer Chris Wisco (LAZARUS A.D., JUNGLE ROT, ORIGIN, GORGASM), while the remaining instruments were tracked at Mercenary Digital Studios in Zion, Illinois with engineer Scott Creekmore (DIRGE WITHIN, PUTRID PILE, LIVIDITY). 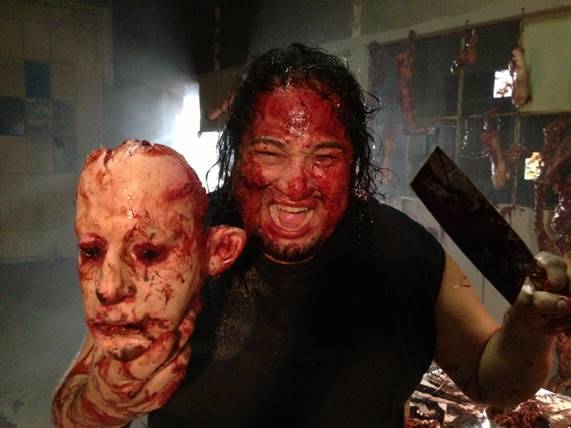