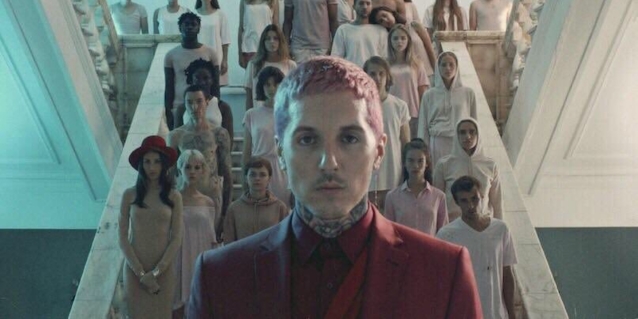 British rockers BRING ME THE HORIZON have released a new single, "Mantra". Singer Oli Sykes told BBC Radio 1 about the track: "It felt like the first thing we wanted to show people upon our return."

Asked if the new song's arrival means that fans can expect a new album from BRING ME THE HORIZON soon, Sykes said: "I don't want to say. We're definitely working on stuff. We've got something exciting to announce in the next few days."

Prior to the new song's premiere, BRING ME THE HORIZON launched a mysterious campaign, including a billboard reading "Do You Want To Start A Cult With Me?" That line ended up being one of the lines in "Mantra". The promotional campaign also saw the band starting a web site, joinmantra.org, with an initial message that read: "There are those who will say that only after a lifetime of sacrifice and good doing can the soul be free — that God demands conditions in the freedom and that some have the power of making mankind slaves."

Sykes said the music he and his bandmates are working on is "completely different" from 2015's "That's The Spirit" album, which was criticized by some for going too far in a pop direction. He added: "We want to be a heavy band, but not in the way you think of heavy."