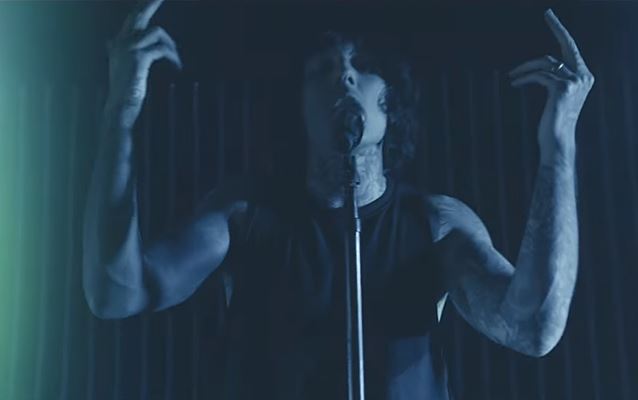 BRING ME THE HORIZON's video for the song "Avalanche" can be seen below.

"This is the first time we've worked on filming and editing the whole project," says Tom Sykes, brother of BRING ME THE HORIZON frontman Oli Sykes, who worked on the video with the band. "Having creative control over every aspect from start to finish was great. It was a lot of work, but extremely rewarding! We enjoyed working on it together so much that we've decided to start a collaborative company called Fun Blood so we can work on projects together in the future."

Oli Sykes said in a recent interview with BBC Radio One that the band's recent shift toward a more commercial sound isn't a case of "selling out" because the group was always headed in that direction. Sykes explained: "We always wanted to be the catchiest, heaviest band. It wasn’t intentional to become an A-list radio band. It was just the music we like. We like pop music. We like catchy songs. But we also like heavy songs. None of it feels forced — none of it feels like we’re selling out. It’s real, and it’s good."

Sykes told The Pulse Of Radio that BRING ME THE HORIZON's musical progression goes hand in hand with their growth as people. "It's got to be true to where we are at," he said. "I think some bands at this age, when you get into fifth album and stuff as well, are still trying to sing about the same things and stuff to make the kids happy that used to listen to them. But if it's not true to what you are, it's not where you're at in life, it's gonna look transparent. I think that's why we've managed to carry on as a band, because we've always evolved and we've always made music that we still really, really love. It's not music that we used to love."

Sykes added that the band's evolution hasn't cost them any fans, saying: "That's why people from the scene still respect us, and new people are getting into it — it doesn't feel like something we’re doing for any other reason than because we love it."

"Avalanche" is taken from BRING ME THE HORIZON's fifth album, "That's The Spirit", which debuted last September at No. 2 on the Billboard 200 album chart. The lead single from the set, "Throne", topped the Active Rock radio chart in November.

The band will be touring Europe for the rest of the summer.