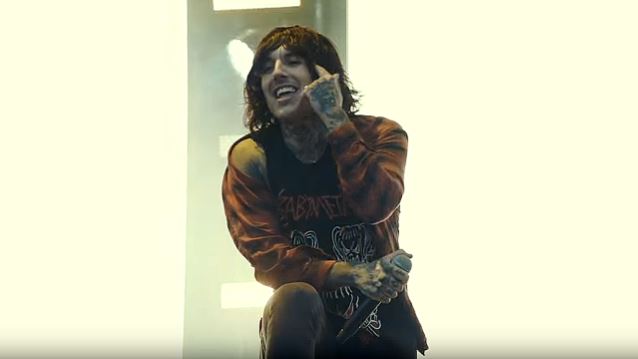 Professionally filmed video footage of BRING ME THE HORIZON performing the track "Happy Song" at this year's Leeds Festival can be seen below.

"Happy Song" is taken from BRING ME THE HORIZON's fifth studio album, "That's The Spirit", which debuted at No. 2 on The Billboard 200 album chart, selling 62,000 copies in its first week of release. The total number broke down to 55,000 physical copies of the CD and 7,000 streams. The chart and sales numbers were career highs for the British act, whose previous album, 2013's "Sempiternal", debuted at Number 11 with 27,000 copies sold — the group's previous career best.

"That's The Spirit" marks a surprising change in BRING ME THE HORIZON's sound and singer Oliver Sykes told The Pulse Of Radio how it came about. "Really, we were wrapping up 'Sempiternal', and we just felt like we'd progressed a lot just in that short space of time since releasing 'Sempiternal' and touring it, so, yeah, I guess when we finished the campaign, we just really felt like we had a big opportunity. Like, 'Sempiternal' really got us out to the public a lot more than the previous record and stuff, and it felt like people were waiting to see what we did next and people were really hungry for it, you know what I mean? So we just wanted to take the opportunity and really smash it out of the park, I guess."

"That's The Spirit" not only marks a change in the band's sound but also has a concept behind it.

Sykes explained recently: "It's a celebration of depression. A way of making light of it. That's the spirit — it's quite a depressing phrase when you think about it — the sort of thing you only ever use when you know there's no positive answer to the situation."

BRING ME THE HORIZON recently launched a North American headlining tour that stops in Denver, Colorado on Tuesday (October 20).