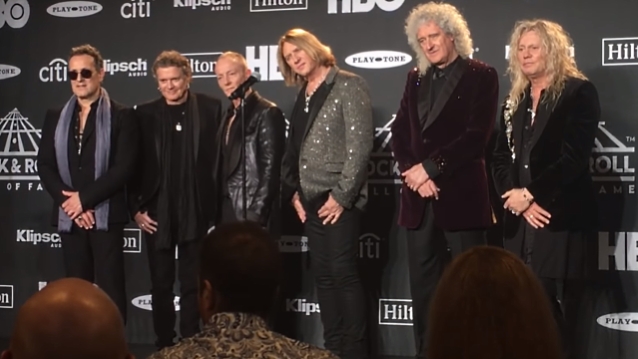 Speaking to SiriusXM shortly before the event, May said that he felt from the very beginning that he was the right person to deliver the induction speech.

"I would hate it if anyone else had done it rather than me, 'cause they are family to me, and they have been for a long time, and I love 'em dearly," he said (hear audio below). "And I know a lot about 'em, 'cause we spent a lot of time together. They've done stuff for us. Particularly with Joe [Elliott, vocals] — I go back, and we've done all kinds of stuff for each other and with each other. And we're kind of like brothers, I suppose. So, yeah, I had to do it — I had to be here."

Asked how far back he goes with the members of DEF LEPPARD, May said: "We go back to about 1981, when I failed to see them as support act to Ritchie Blackmore's RAINBOW in Munich. And I felt so bad that I didn't see 'em, 'cause it's rude — you get there too late — so I went in their dressing room. I found where they were, knocked on their door, put my head in and I said, 'Hi, guys. I just wanted to say hello.' I said, 'I'm Brian May from QUEEN.' And they went, 'No shit.' And they said, 'You have no idea. We've all been fans of you guys, and you're our kind of template,' which was a great honor for me. I had no idea they even knew who I was, so we became very close for a long time. I saw them at the Forum in L.A. a couple of years later, and they devastated the place. And they asked me to play with them on the second night. So I went out and we did [John Fogerty's] 'Travelin' Band', and the rest is history."

Pressed about why he felt he needed to be the one to induct DEF LEPPARD into the Rock Hall, May said: "They are that close, really, and we share a lot of the same kind of guiding lights. They proudly quote us as an influence, like we would quote [LED] ZEPPELIN as an influence. And, yeah, we see things the same in so many ways. And it's a crusade, in a way, to put your stuff out there and deal with the shit that comes with you on the way. And they've had piles of it, and we have too. But you keep yourself together and you keep your dignity, and in the end, you remind yourself that people know best, the fans know best. And here we all are."

One of the top-selling rock acts of of all time, DEF LEPPARD had been eligible for the Rock Hall since 2004.