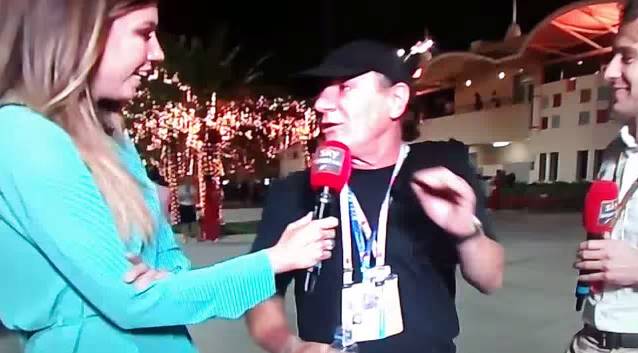 AC/DC singer Brian Johnson told an Italian television channel on April 6 — exactly ten days ago — that the band was planning on entering the studio in May to begin recording its 16th studio album. During the three-minute chat, which was conducted by Sky Italia's Sky Sports F1 channel at the Bahrain Formula One Grand Prix at the Bahrain International Circuit in Sakhir, Bahrain, Johnson said that he will join his bandmates in the studio next month but that he will travel to Italy between May 15 and May 18 to participate in the historic Mille Miglia race in which he will drive his 1954 D Type Jaguar, making the trip back and forth between the cities of Rome and Brescia. You can watch the interview below (in English, with Italian overdubs).

As previously reported, a musician who says he has been friends with AC/DC for "years" has corroborated reports that guitarist Malcolm Young is no longer able to perform with the band due to illness. Mark Gable, lead singer with the CHOIRBOYS, told ABC Radio Australia, "From what I understand, and it's even been confirmed in part by his son Ross… It would appear Malcolm is unable to perform anymore. It's not just that he is unwell, it's that it is quite serious. It will constitute that he definitely won't be able to perform live. He will probably not be able to record."

Despite reports that Malcolm's illness will lead the band to retire now, Gable said that it's possible they could still go out on one more tour to mark their 40th anniversary. He noted that Malcolm and Angus Young's nephew Stevie replaced Malcolm on a tour a few years back.

Australian journalist Darryl Mason wrote that Malcolm suffered a stroke last month. According to The Age, a source who knows the Young family has said that Malcolm's condition has deteriorated so badly that his wife Linda and family were investigating full-time care for the guitarist. It is believed that Malcolm is currently having in-home care at his home in the Sydney area. He is said to be having difficulty remembering familiar faces and having increasing problems communicating.

Meanwhile, a report posted at Billboard.com on Tuesday (April 15) quoted anonymous "insiders" as saying that there are no truth to the band retirement rumors. But stories have continued to appear in the Australian press that an announcement is imminent, while the band's record label and management have yet to issue any comment on the matter.

While the members of AC/DC are notoriously private, Johnson did reveal in a 2012 interview and in a February 2014 one that an unnamed member of the group had been ill — but whether that was Malcolm remains unclear.

Johnson said in the same interview in February that the band had booked studio time this May in Vancouver — which has been corroborated by other reports — and planned a new album and tour to celebrate the band's 40th anniversary.

Asked about the prospect of retiring one day, Johnson told The Pulse Of Radio that he would know when the time had come. "You know, retirement is like anything," he said. "A good football or a good ice hockey player, they don't want to retire. But unfortunately, sometimes there's a time when you have to call it quits. I don't want to do it, and if we can get out another album and do another little short tour or something, and have a bit of fun, well. I'm your man. I'll be right there."