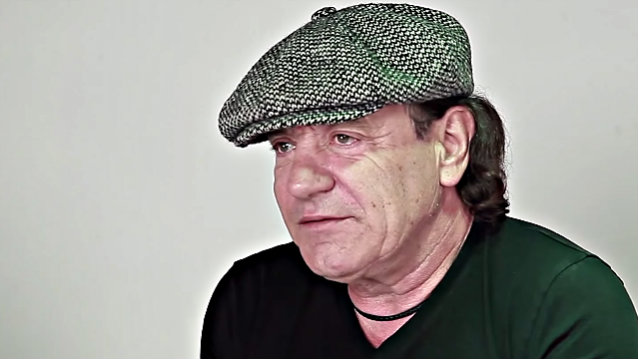 Brian Johnson has recorded an audio message in support of the Swedish AC/DC fan club's plans to stage a charity concert.

The fan club will organize a live event, dubbed "Acdcmachine Gathering", later this year to raise funds for Alzheimer's and/or dementia research.

The show will be held on March 17 in honor of AC/DC founder and guitarist Malcolm Young, who was forced to leave the band in 2014 because he is suffering from dementia. He has been replaced by Stevie Young, nephew of Malcolm and AC/DC guitarist Angus Young.

In his audio message, Johnson said: "I just wanna say I'm so proud of what you're doing for the Alzheimer's/dementia research.

"As you know, we have a wounded soldier, Malcolm, and I think what you're doing to raise the awereness of everyone about this dreadful disease is just absolutely fabulous. I know Malcolm would be so proud of you, and I am, and I wanna thank you for doing this.

"As you know, on my racecar, we have 'Highway To Help' [campaign benefiting the Alzheimer's Association] which is exactly the same thing — we're trying to tell people about this awful disease and trying to get a cure for it. You guys are helping, and I'm so proud of you. Thank you, and I wish you so much success."

The Sydney Morning Herald reported in September 2014 that Malcolm was being treated in a nursing home in Sydney, Australia. The facility was believed to be Lulworth House in Elizabeth Bay. A Young family connection told the newspaper, "If you were in the room with [Malcolm] and walked out, then came back in one minute later, he wouldn't remember who you are. He has a complete loss of short-term memory. His wife, Linda, has put him in full-time care."

Malcolm did not participate in the recording sessions for AC/DC's latest studio album, "Rock Or Bust", which arrived in December 2014.

In March 2016, AC/DC abruptly postponed 20 gigs in both North America and Europe after doctors advised Johnson to either quit performing live or face "total hearing loss." The shows were eventually completed with GUNS N' ROSES frontman Axl Rose serving as a "guest vocalist" on the tour.