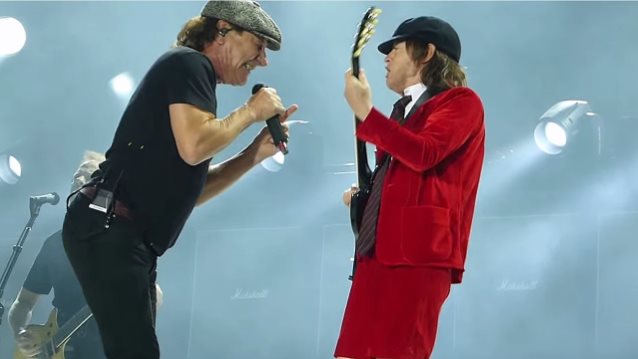 A few days after a Canadian journalist claimed that Stevie Young and Phil Rudd were spotted in downtown Vancouver, we now have the first photographic proof that something is brewing in the AC/DC camp.

According to Steve Newton of Straight.com, Vancouver resident — and hardcore AC/DC fan — Crystal Lambert has an apartment located near Warehouse Studios, where the band's last three albums were recorded, and she and longtime friend Glenn Slavens have been keeping an eye on the studio's outside deck, where various bandmembers seemingly retreat to get some air and get a drink.

As you can see from the photo below, taken by Glenn two days ago, Rudd appears to be sharing a laugh with none other than singer Brian Johnson.

Rudd told Kaaos TV in a 2017 interview that he "would like to be involved with Angus again, maybe on the next [AC/DC] album or something. But I still have some traveling restrictions, and I'm not sure if I can go to America or not," he said. "I've got some lawyers doing some work so I can go back to America, but I'm not too sure. So I have some limitations on what I can do, and I'm just making the best of my situation at the moment."

Asked if was is in contact with his former bandmates in AC/DC, Phil said: "I am. Yes, I am. I talk to Brian, and we just talk about cars, and I talk to Cliff, and we just talk [about] anything. It's just old friends talk. But I'm sure Angus has got a few ideas. He did a great job on the 'Rock Or Bust' album. I think it's a great album — one of the best ones we've done, for sure. [It was] very well produced by Brendan O'Brien, who understands guitarists. And he did a really good job. And I was pleased with my work on that as well."

The rock legend spoke to The Sunday Times about the hearing problems that almost ended his 36-year career with AC/DC. "On stage, it was getting harder and harder to hear the guitars, even hear the keys, and I was basically going on muscle memory," he said. "And I'm not the kind of guy who likes to cheat. The way I look at it, I had a great run."

Two years ago, Johnson said in an open letter to fans that he intended to solve his hearing problem and continue recording and touring, although he pointedly did not say whether he would be rejoining AC/DC.

The Warehouse has been AC/DC's studio of choice for the band's last three albums: 2000's "Stiff Upper Lip", 2008's "Black Ice" and the aforementioned "Rock Or Bust".