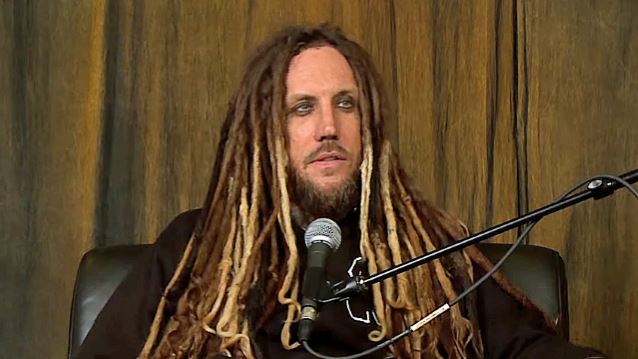 In a brand new interview with The Arizona Republic, KORN guitarist Brian "Head" Welch — a former drug addict and reformed Christian — spoke about what it was like rejoining the band in early 2013, eight years after first leaving the group.

"If it was a crazy party still, I would not have gone back," he said. "I mean, I'm around parties and we go to bars sometimes. I hang out with my friends and some of them drink mildly, but if there was, like, cocaine and bong rips thrown in my face every day, I couldn't do it. It's not the atmosphere I want to be around. So yeah, I was nervous. But once I met with the guys and reconciled with them, I was, like, 'Wow, they don't care about that anymore.' It was a been-there-done-that type of thing. Some of them have young kids. They're still poppin' out new kids, so it's a different atmosphere. It's not, like, 'Let's get wasted and send our crew guys out to get, like, 50 girls backstage.' It's different now that people care about their families and want their marriages to actually not end in divorce. They want to be good dads. They aren't killing themselves anymore. And it's been really cool. Everyone is focused on the music and the fans and just keeping this band together."

Welch was also asked how he was able to reconcile and set aside whatever tension may have been there between him and his KORN bandmates. He said: "My daughter turned into a teenager and started liking rock music. She liked EVANESCENCE and STAIND and CHEVELLE and all these bands. So, I ended up taking her to a show where all three of those bands were playing, and KORN ended up playing last that night. So I was just gonna go and do my thing, go out to the soundboard and watch KORN out there. But they found out I was there and asked me to come and hang out. So I went and I saw [KORN guitarist James] Munky [Shaffer] for the first time in eight years and we just conversated. He looked at me and my daughter and it kind of made sense, everything that happened. So talking to him and seeing how clear he was, it was a meant-to-be type thing, the right place at the right time. Then they asked me to go do a meet-and-greet with them, to go sign autographs for fans. And I was just, like, 'Man, that’s weird. That was, like, a lifetime ago.' So I did that. Then, they asked me to come onstage and play 'Blind' with them and I said sure. I went up there and it was so intense. All the bands I mentioned earlier and even more were all on the side of the stage watching. A lot of people were in tears. At first I resisted it. I was, like, 'Nah, I'm doing my own thing. I don't want to get on that crazy train again.' The KORN train never stops touring, and I just didn't want to do that. But the next thing you know, I started thinking about it more. Me and Munky were in communication on the phone and it just worked out."

KORN kicked off a co-headlining tour with ROB ZOMBIE, "Return Of The Dreads", on July 19 in Englewood, Colorado. That trek winds down on September 3 in Bristow, Virginia.

KORN will also hit the road this fall with co-headliners BREAKING BENJAMIN for the "Nocturnal Underground Tour", which will launch on September 24 in Fargo, North Dakota and run through late October.

KORN's much-anticipated new album, "The Serenity Of Suffering", will arrive on October 21 via Roadrunner. The official video for the disc's first single, "Rotting In Vain", was released earlier in the month.