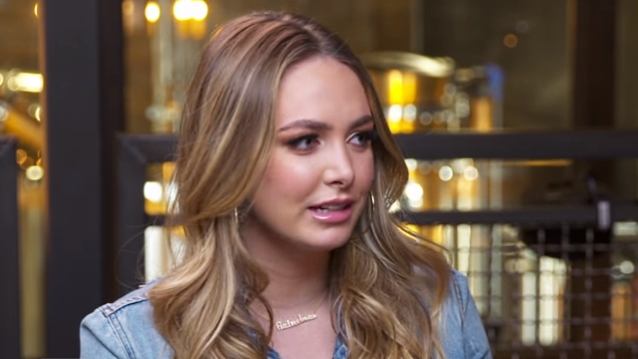 Bret Michaels's eldest daughter, 18-year-old Raine Michaels, says that her father has been "so supportive" of her career choice after she was recently announced as one of six finalists in the 2019 Sports Illustrated model search competition. This means that she has a one-in-six chance of shooting a spread for this year's edition of the iconic magazine issue.

"He's so supportive, which means the world to me," she told ET Canada. "'Cause a lot of dads wouldn't be. Especially [when I pose for photos] in little bikinis. But he's so supportive of anything that I wanna do, and he wants me to be successful in what I wanna do in life. So I can't ask for anything more."

Bret recently told Fox News that he could not be prouder of Raine. "As a father, I'm there from the cutting of the umbilical cord till right now, and I mean her mom too," he said. "I'm saying this, both of us, as parents, really, really proud of Raine. She's done a great job. She is going to school at a really good university for broadcast journalism. She loves it. She's in Tennessee doing that."

He continued: "She's one of those people who's a kind soul. She's humble. At the same time, she's a fighter. I'm really proud of her. I'm thankful for the views and the votes. Sports Illustrated — because I'm a sports fanatic — I'm so proud of her because it's also a great magazine for them to get recognized. All of the girls that entered, I give credit to, and the six finalists, it's amazing."

Asked if he initially had any reservations about his daughter flaunting her figure for the magazine, Bret said: "I knew she wanted to model... You know they call it 'coming of age.' They're going into their own. She's 18 years old. She's making her decision on college, so you hope that you gave her the right skills and the right mindset to make the right decisions. That's all you can do and I'm there for her no matter what.

"No matter what happens in her life, I'll be there as a dad because you want to be a good provider and a good protector, and I also tell her the risks that come with it," he added, noting that "there's a lot of great people and people that are going to be behind her and great, and you're also going to get some people that aren't great people — whether they are trying to talk her into some bad contract or they're perverts or whatever they are, you know.

"She's going to have to deal with the good and the bad."

Raine and 13-year-old Jorja Bleu, along with their mom and Michaels's on-off love Kristi Gibson, appeared in the short-lived 2010 reality show "Bret Michaels: Life As I Know It".

Wishing I was back on island time w/ @si_swimsuit ???☀️