It's Bret Michaels's 58th birthday on March 15 and he's bringing the party and unbroken positive spirit to his millions of fans. The forward-thinking musician has always been at the cutting edge of video-on-demand and virtual show opportunities, and will celebrate the special day with his generations of awesome fans on Monday, March 15. Michaels, who has sold over 45 million records worldwide both with POISON and solo, will be hosting an epic show on StageIt, the online venue that allows fans to have a live show experience in the safety and comfort of their own home. The singer/songwriter will be featured on a NASDAQ billboard in New York City's Times Square in anticipation of the upcoming show, which goes on sale this Wednesday.

With his three generations of followers missing the usual 200-plus live performances of the Bret Michaels band each year, this StageIt show is designed to give those fans an opportunity to interact with Michaels in a true in-home celebration. His previous shows on the platform have sold out in record time. Only 200 tickets are available for this performance.

The birthday bash comes during a busy start to 2021 for Michaels. His iconic music image has just launched as an in-demand collectible Funko Pop! Vinyl, while his reality TV shows are rocking numerous streaming platforms.

The special show will feature nearly an hour of a live, highly interactive question-and-answer session. Additionally, there will be a range of rare collectors' items available for charity auction, a trademark of Michaels's live shows. The fandom has spoken and Michaels has responded by giving them what they want — an intimate question-and-answer session and live chat with Bret who gives 1000% in all he does while continuing to sell out arenas and stadiums around the world.

The performance will give attending fans an exclusive sneak preview of a never-seen acoustic version of "Look What the Cat Dragged In". If time allows, he will also unleash an acoustic version with cajon of "Nothin' But A Good Time", something never publicly viewed. The songs are a first glimpse of the singer's upcoming video compilation "Classic Acoustic…Unplugged & Raw", a collection soon to be released only at ShopBretMichaels.com. Also soon be released will be "V.S.S. (Videos, Songs & Stories)", a deep dive into the making of his videos, the purpose of the song and the story behind it.

Combining his creative entrepreneurial brand with his unparalleled work ethic, Michaels (known to fans as "Bandana Man") has been working with Funko, the world's leading pop culture consumer products brand, to create his first-ever limited-edition Pop! Vinyl figure. As Michaels has done with previous brand partners, he remained hands-on throughout the creative and design process, including during the creation of an ultra-rare "Chase Pop!" figure featuring Bret's signature surfer cowboy hat look.

The StageIt show will also include an exclusive auction for two of Michaels's personal production samples from the upcoming Funko figure. Both will be personally signed by Michaels, making them highly prized collectibles for Funko enthusiasts and Bret Michaels fans alike. Michaels, a lifelong diabetic and avid philanthropist, is including the auction to support his Life Rocks foundation, which provides donations each year to a myriad of causes such as diabetes research and education, the Wounded Warrior Project and children's cancer organizations such as St. Jude.

Off the stage, Michaels has also been rocking the television streaming world, starting with his hit shows "Rock Of Love" and "Life As I Know It". Demonstrating his forward thinking and lifetime of experience in outdoor living and recreation in addition to his extensive touring, his Travel Channel show "Rock My RV" premiered on the recently launched Discovery+ platform. Michaels will be featured on the cover of Hook & Barrel magazine where he shared true life stories of growing up outdoors. Fans have eagerly binged his TV hits on Hulu, Amazon Prime, Tubi, PlutoTV and AppleTV, and rumor has it his winning season of "Celebrity Apprentice" will soon be joining NBC's Peacock platform, providing yet another place for Michaels fans to get their fix. 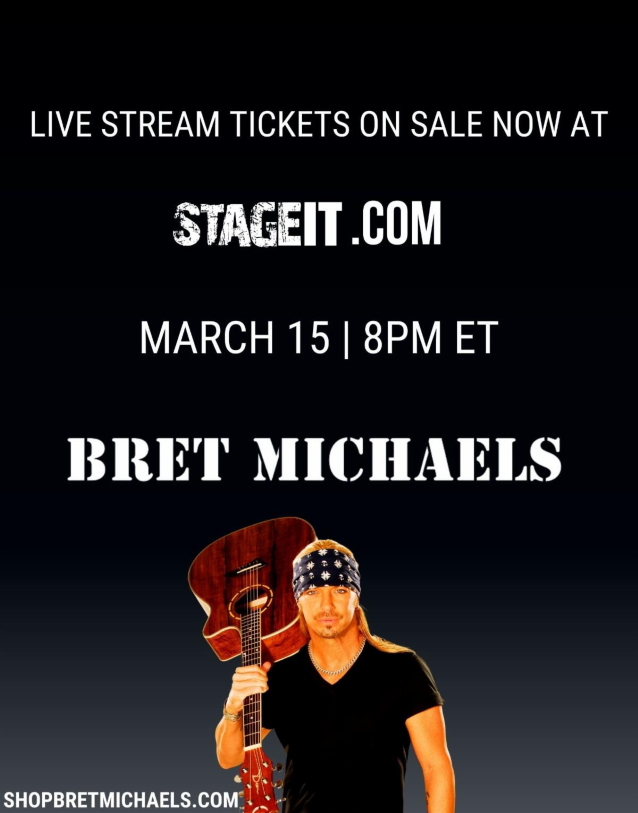