Iconic rock band POISON, with all original members, will embark on the "Poison…Nothin' But A Good Time 2018" tour later this month. The trek, which is set to launch May 18 in Irvine, California at Five Points Amphitheatre, will also feature CHEAP TRICK and POP EVIL.

POISON singer Bret Michaels told SiriusXM's Eddie Trunk: "I'm really excited to see C.C. [DeVille, guitar] and Rikki [Rockett, drums] and Bobby [Dall, bass] again and get together. We're gonna have amazing rehearsals. And that's where you put in all the really hard work, just cutting through the songs we wanna do. But this year, we're really gonna focus on putting back into the set 'I Want Action', 'I Won't Forget You', 'Fallen Angel', some of the stuff that, when we were out with DEF LEPPARD and out with KISS and MÖTLEY [CRÜE] and all these different bands co-headlining, what happened is your set's a little shorter. Now we're gonna put all that stuff in. And we appreciate it — don't ever misunderstand me; I love it. And last year with DEF LEPPARD was great. But focusing on rehearsals is gonna be amazing. I'm excited. And I've really gottta say this: we've worked hard on designing the look of the show, making sure that, obviously, the audio is right and visually, it's right. But, as you know, we're still, as POISON, a true, honest-to-God live rock and roll band. I don't even use the in-ears — I'm still the monitor guy; I like that feel of an energetic live show. And so it's real honest-to-God, straight-up-in-your-face live rock and roll."

POISON's 2017 tour with DEF LEPPARD marked the Michaels-fronted outfit's first U.S. run of shows in more than four years. But, according to Bret, the band never split up. "There was no set intention not to be with the guys," he explained. "We never sat down and said, 'Let's not do this.' We went hard and strong there for a long time — from '99 straight up to probably about 2012 — and then there was just a little break period in there. But, for me, [I] started to [get involved] with 'Rock Of Love' and 'The [Celebrity] Apprentice' and 'Rock My RV' — a bunch of reality shows and stuff going on... And I'm glad to be back. C.C. and Bobby and Rikki are fired up. And it's gonna be, as always, an unbelievable, energetic show. The way we approach it is with total fun, total energy."

POISON appeared at the 2013 Indy 500 Miller Lite Carb Day, but had otherwise been mostly playing private shows before the 2017 DEF LEPPARD tour, including one in January 2015. 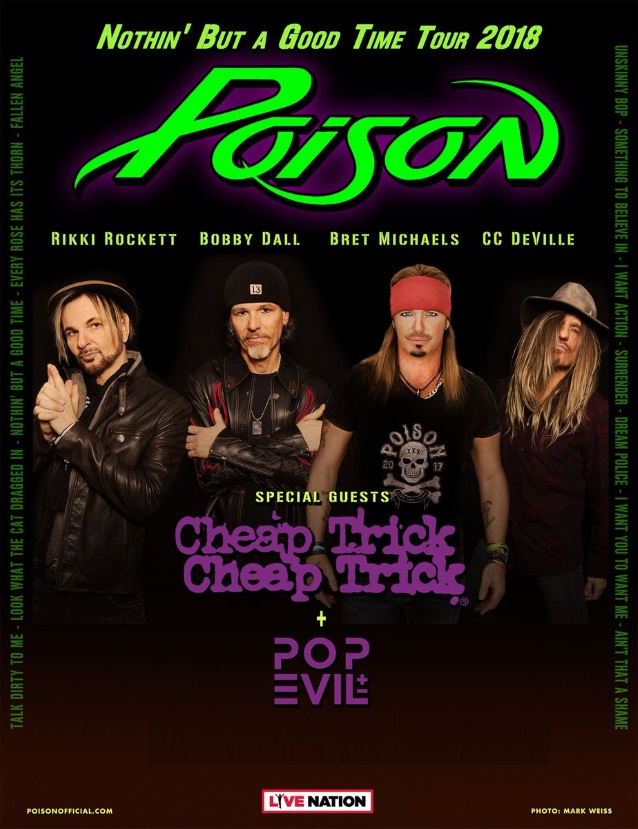