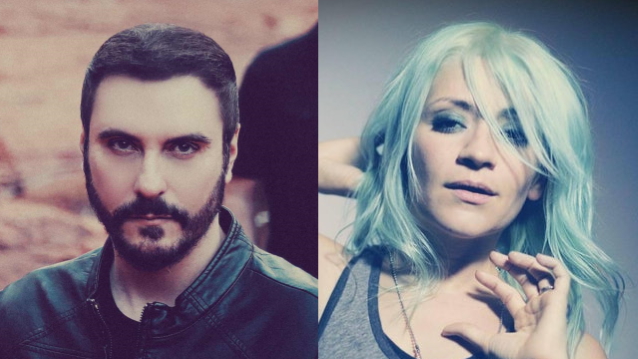 BREAKING BENJAMIN frontman Benjamin Burnley says that he would love to collaborate with ex-FLYLEAF singer Lacey Sturm on a new project. "I don't know if she'd be mad at me for saying anything about it, but me and Lacey have been talking about doing another band, putting a band together," he told "Cutter's RockCast" at last month's Rock USA festival in Oshkosh, Wisconsin (hear audio below). "We just wanna do, like, a record… We've been talking a bit here and there about it. It'd just be something different. I think that'd be really cool."

According to Burnley, he has been friends with Sturm for more than 10 years. "And one of the first tours, I think, they [FLYLEAF] ever did — not the first, but one of the first tours they did ever — was with us," he said. "And it was a lot of fun. It was a lot different back in those days. Enough success to have fun, but not overboard, and it was all new and everything. And she was always really cool; the whole band was always really, really cool.

Sturm recently laid down guest vocals on the song "Dear Agony" for BREAKING BENJAMIN's upcoming acoustic album, tentatively due before the end of the year. Burnley told HardDrive Radio that disc will feature mostly reworked versions of the band's notable hits, including a couple from last year's "Ember" LP, plus one new song. Other guest singers include former THREE DAYS GRACE frontman Adam Gontier (on "Dance With The Devil") and RED vocalist Michael Barnes (on "Failure").

Burnley explained how he chose the singers: "These are guys that are all just like friends of mine. So I just was like, 'How can we put some more of an original spin on this so it's not just like a remake of things?' And that's what I came up with. And I tried to get a couple of more too, but it was like a time thing. These guys, more so than anything, they're like my friends. That's what's cool about it to me."

Burnley told Music Mayhem last year that BREAKING BENJAMIN will "do a small tour" to promote the acoustic album.