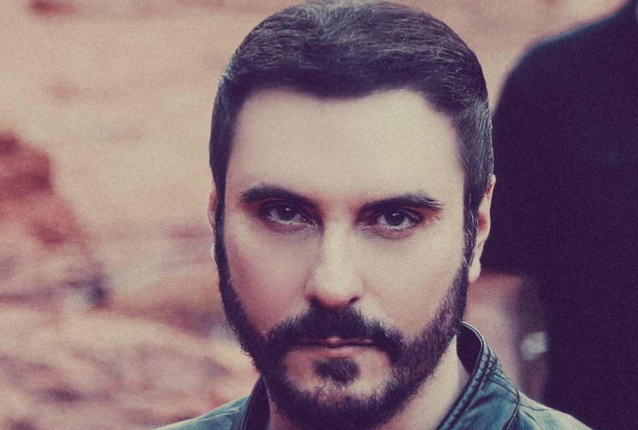 BREAKING BENJAMIN founder/frontman Ben Burnley was recently interviewed by Andy Hall of the Des Moines, Iowa radio station Lazer 103.3. You can listen to the entire chat via the SoundCloud widget below. A few excerpts follow (transcribed by BLABBERMOUTH.NET).

On the release of "Aurora", a collection of reimagined versions of the band's biggest and most popular songs:

Ben: "We have guests on there, a lot of guest vocalists. It's definitely going to be something people have absolutely never heard before."

On whether his songs take on a new meaning over time:

Ben: "Yeah, they do. People always try to ask me what songs are about. I honestly don't know. Lyrics and the music and stuff like that, it comes to me. It just happens to me. If I knew how to make it happen, I would do it all the time. I would just [say], 'Okay, right now I'm going to write a song that's going to be about this.' I just never have done that. I can't do that. I just write when it happens and I just let it flow. At the end of the song, when it's all done, I'll listen to it like anyone else, and then it will have some meaning to me. We just released 'Far Away' and a friend of mine sent me a link to a YouTube thing for it and I was just scrolling through because he wanted me to read one of the comments — I don't remember what it was, but I was just scrolling through all the comments and it was really cool to see how many people took the song in how many different ways. And if I sit there and tell them what I think it's about, then they're not going to have… that wouldn't happen. I love that about music. I love that it's one thing to you then it is to someone else or to this guy or that person or whatever. I think that's probably one of the coolest things about music and writing songs."

On the band's acoustic shows:

Ben: "We always try to throw acoustic touring into whatever we're doing anytime — whether there's an acoustic record out or not, we always try to do acoustic touring. It keeps us really tight as a band — we don't have any computers running, we don't run any tracks, we don't run any click tracks; we literally play live, like, everything. So when we go out and we play acoustic tours, we don't change the riffs or anything like that. We play them exactly how they are electric, but there's nothing to hide behind — there's no effects, there's no nothing to hide behind. We do use technology onstage, but we don't play to any tape of ourselves; everything's live, but we still do use technology, don't get me wrong. When you play acoustic, there's no technology there. It's stripped-down, so you got to make things really tight, really, really tight. So then when we go back and we play electric, when I play this riff, it's, like, 'Man, it's so much easier now.' It's hard to play some riffs on an acoustic guitar."

On COLD frontman Scooter Ward's involvement on the new song "Far Away":

On the band's relationship with KORN, with whom BREAKING BENJAMIN is currently on a co-headlining tour of North America:

Ben: "This is the second time that we've been on tour with KORN where we are playing a longer show with them. We are ridiculous KORN fans from back in the day. It's surreal to me, even to this day, that I'm able to talk to them. Seriously. I looked up to them before I had anything in life, and it's an idol thing. It's like a 'meeting-your-idol' thing and that will never go away. [Bassist] Fieldy [Reginald Arvizu] was actually telling me a story a while ago because I told him, 'Man, I can't get over that I'm hanging out with you.' Because I hung out with him quite a bit and I still can't get over it, and he said he felt that way for a little while too with MÖTLEY CRÜE because that's what they were to him, because that's his era. MÖTLEY CRÜE to them is what KORN is to me in the timeframe of things. We all go through it. I toured with KORN quite a bit, but I've only done, I don't want to say an 'equal billing' because we'll never be equal to KORN — KORN is KORN, but a higher-up sort of thing. I've opened for KORN and toured with KORN before, but on a much lower slot many times, actually. It's cool. It's cool to grow as a band and get closer to them. It's cool to have known them for as long as I've been honored to know them for, and just to be a part of it, and that they asked us to do it, they're having us with them, and I get to see KORN for free every night. Not a bad gig."

Produced by Live Nation, BREAKING BENJAMIN's 24-city co-headline tour with KORN kicked off January 23 and will include stops in Columbus, Green Bay, Portland and more before concluding on March 1.